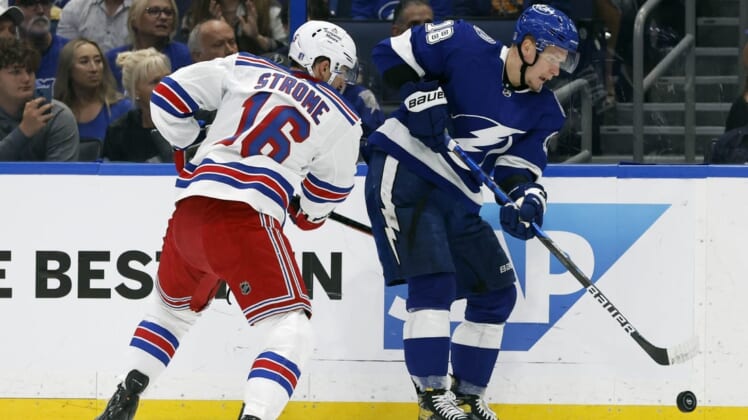 Ondrej Palat scored the go-ahead goal with 41.6 seconds remaining in the third period to lift the host Tampa Bay Lightning to a 3-2 victory over the New York Rangers on Sunday afternoon in Game 3 of the Eastern Conference finals.

Tampa Bay capped a spirited rally from a two-goal deficit after Nikita Kucherov’s nifty backhanded feed found Palat for a shot from in close that sailed inside the near post. The goal was Palat’s sixth of the playoffs.

Kucherov collected a goal and two assists and captain Steven Stamkos added one of each. Andrei Vasilevskiy finished with 28 saves for the Lightning, who have won five straight home games and trimmed the Rangers’ lead to 2-1 in the best-of-seven series. Game 4 is on Tuesday in Tampa.

New York’s Mika Zibanejad recorded a power-play goal and an assist and Chris Kreider also tallied with the man advantage. Igor Shesterkin turned aside 48 shots and Artemi Panarin notched a pair of assists for the Rangers, who fell to 2-6 on the road in the playoffs.

New York’s Ryan Strome sustained a lower-body injury early in the second period. He returned for one shift before retreating to the locker room. He did not return.

Defenseman Adam Fox sent a diagonal feed from the point to Zibanejad, who wired a shot from the left circle that sailed past Vasilevskiy to open the scoring at 7:37 of the second period. Zibanejad’s 10th goal of the postseason was his sixth on the power play, tying Adam Graves (1996) for the franchise record in a single postseason.

Kreider doubled the advantage just more than two minutes later after cleaning up a loose puck on the doorstep. Kreider’s 10th goal of these playoffs boosted his career total to 34, tying Hall of Famer Rod Gilbert for the franchise record.

Kucherov halved the deficit at 10:50 of the second after his blast from a sharp angle deep in the right circle handcuffed Shesterkin. Kucherov’s goal was his sixth of these playoffs and franchise-record 50th of his career in the postseason.

Tampa Bay forged a tie at 1:22 of the third period after Corey Perry’s diagonal feed found Stamkos, whose one-timer from the top of the left circle caromed off the crossbar and into the net. Stamkos’ goal was his sixth of the playoffs.