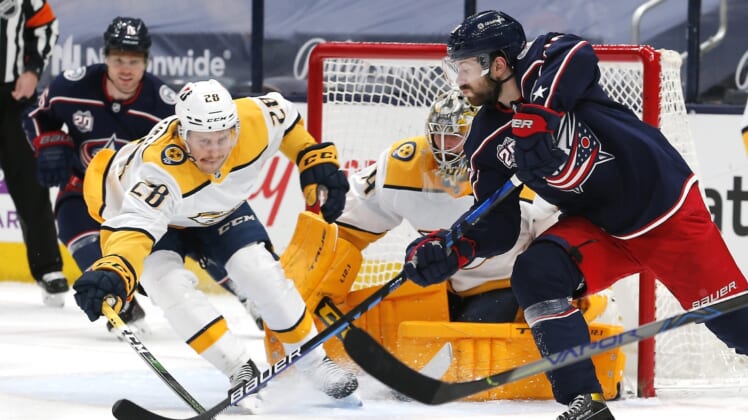 The Blue Jackets got the go-ahead goal with 6:10 remaining, when Mikhail Grigorenko redirected a slap shot from Vladislav Gavrikov past Nashville goalie Juuse Saros.

Nashville (29-23-2, 60 points) still holds the fourth and final playoff position in the Central Division, four points ahead of the Dallas Stars, who lost 6-2 to the Tampa Bay Lightning on Wednesday. The Stars have two games in hand on the Predators.

Columbus (17-25-12, 46 points) escaped the Central basement for a night, leap-frogging the Detroit Red Wings by a point.

Tanner Jeannot and Calle Jankrok had the goals for the Predators, who got 23 saves from Saros.

The Predators grabbed a 1-0 lead 3:22 into the game. Jeannot grabbed a loose puck behind the net and snapped a shot that found enough space between the near post and Merzlikins’ left pad.

Saros, making his 12th straight start in goal for Nashville, got sloppy with the puck and flipped it over the glass for a delay-of-game penalty early in the second period.

Midway through the power play, Roslovic batted the puck through Saros’ skates at 2:08 to tie the game, marking a pair of milestones. Atkinson was awarded an assist for his 400th career point while Rosolvic earned his 100th career point.

After trading near-misses midway through the second, both teams found the back of the net in the final minutes of the period.

With just under three minutes remaining, Jarnkrok collected a loose puck in the neutral zone and got behind the Columbus defense for a break in on Merzlikins. His wrister rang off the inside of the near post and put Nashville ahead 2-1 at 17:53.

With 50.9 left in the middle period, Bjorkstrand fired a shot through a screen from the right circle, beating Saros to the stick side to even the game 2-2 after 40 minutes.

Nashville heads home to finish the regular season with games against the division-leading Carolina Hurricanes on Saturday and Monday. Columbus concludes with home games Friday and Saturday vs. the Red Wings.