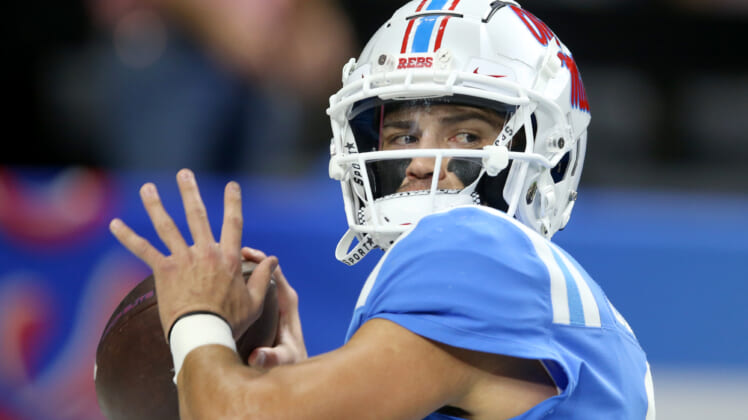 UPDATE 10:11 PM EST: Matt Corral is now on the Rebels’ sideline using crutches. ESPN’s Katie George reported that players and coaches came over to console the quarterback. While no specifics were provided on the injury, Corral won’t return to the game and there is now very real concern about ligament damage.

Ole Miss quarterback Matt Corral suffered a leg injury in the Sugar Bowl, requiring assistance from the trainers to leave the field.

Trying to evade a sack in the first quarter against Baylor, Corral’s leg was twisted awkwardly underneath him and he went down immediately in pain. As Baylor’s players celebrated the sack, Corral remained down on the turf and was immediately grabbing at his leg.

Ole Miss’s medical staff rushed to check on the star quarterback. After several minutes, the Second Team All-SEC passer attempted to stand up under his own power but was unable to. Trainers assisted him to the sideline for further evaluation, with concern mounting for the quarterback’s leg.

Unfortunately, things look bleak for the future NFL quarterback. After being examined in the medical tent, two trainers helped him onto the cart and he was taken into the locker room.

Corral revealed in November that he plans to declare for the 2022 NFL Draft, with a realistic shot at being the first quarterback selected. Despite his plans to go pro, he wanted to play in the Fiesta Bowl to compete with his teammates one last time. 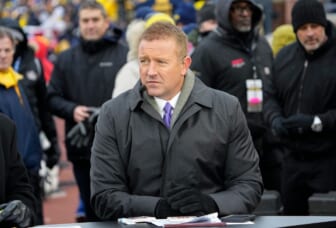 Sadly, the injury is a reminder of why many of the best draft-eligible players in college football opt-out of bowl games. With millions of dollars at stake and their future on the line, there is far too much to risk by playing in a non-playoff game. Now, the football world can only hope Corral avoided a devastating injury that will hurt his draft stock and cost him millions.