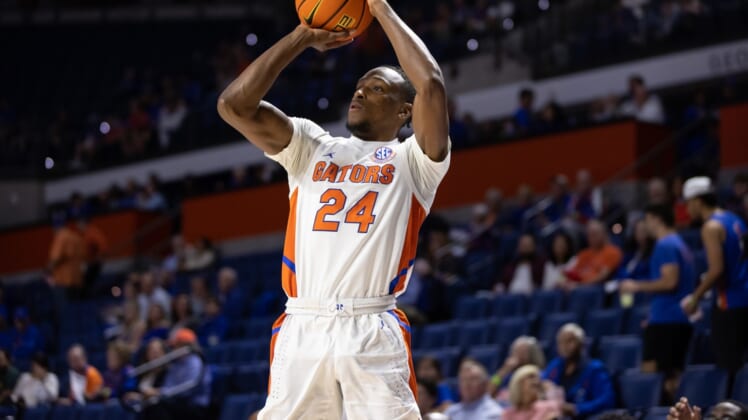 Coach Mike White and his Florida Gators already have weathered one storm. Now they can focus on the Southeastern Conference.

After getting through the holiday break with just one COVID scare, Florida will open SEC play against Ole Miss on Wednesday in Oxford, Miss.

Since a bad couple of weeks when they lost three times in four games, the Gators (9-3) have won two in a row and will look for a quick conference start against the Rebels (8-4), who also will play their first conference game.

Florida starting guard Myreon Jones was placed in COVID health and safety protocol before the team’s last non-conference game, Dec. 22 against Stony Brook — but the Gators still recorded an 87-62 win.

Phlandrous Fleming Jr. scored a game-high 20 points in Jones’ starting spot. The 6-foot-4 Charleston Southern transfer is accustomed to delivering. In his career with the Buccaneers, Fleming was a two-time Big South Defensive Player of the Year and averaged 20.1 points and 7.4 rebounds last season.

Fleming is averaging 11.8 points a game this season, second on the team to Colin Castleton’s 14.8.

“We consider him a starter,” White said. “He’s one of our best players.”

To beat the Gators, Ole Miss will need a much better defensive effort than it showed against Samford on Dec. 21 in a disappointing 75-73 home loss, which snapped the Rebels’ nine-game home winning streak.

Samford made 50.9 percent of its shots against the Rebels, the third time in four games that Ole Miss opponents have made more than half of their shots.

Samford overcame a 42-36 halftime deficit by outscoring Ole Miss 25-6 run in the first eight minutes of the second half. The Rebels rallied with their own run to tie the score, but Samford made crucial buckets down the stretch.

“You should get our best basketball play in the SEC.”