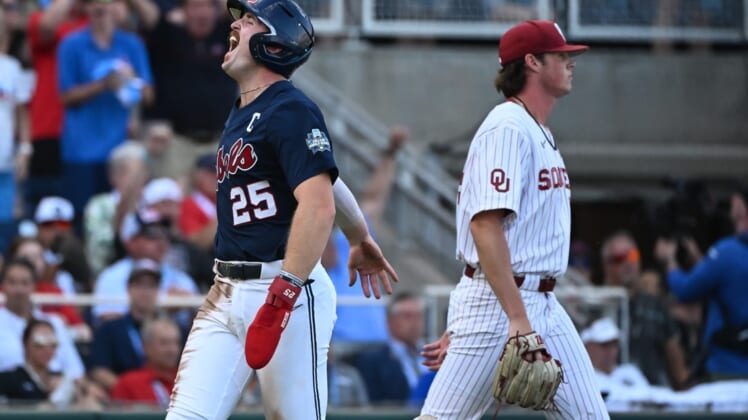 Tim Elko went 4-for-5 with three runs, and Justin Bench and TJ McCants drove in two runs apiece as Ole Miss opened the College World Series with a convincing 10-3 victory over Oklahoma on Saturday in Omaha, Neb.

After outhitting the Sooners 16-5 in the series opener, the Rebels can win the championship Sunday (with Game 3 on Monday, if necessary.) Either team would become the first unseeded CWS champion since Coastal Carolina in 2016.

Ole Miss (49-23) scored in each of the first three innings, taking a 4-0 lead on Elko’s third-inning solo shot. Kevin Graham had a first-inning RBI single and Bench added one of his own in the second as part of the early scoring barrage.

Oklahoma (45-23) pushed across two runs in the sixth, but McCants, Calvin Harris and Bench hit back-to-back-to-back homers in the eighth against Chazz Martinez to create an 8-2 margin. The Rebels added two more runs in the ninth for good measure.