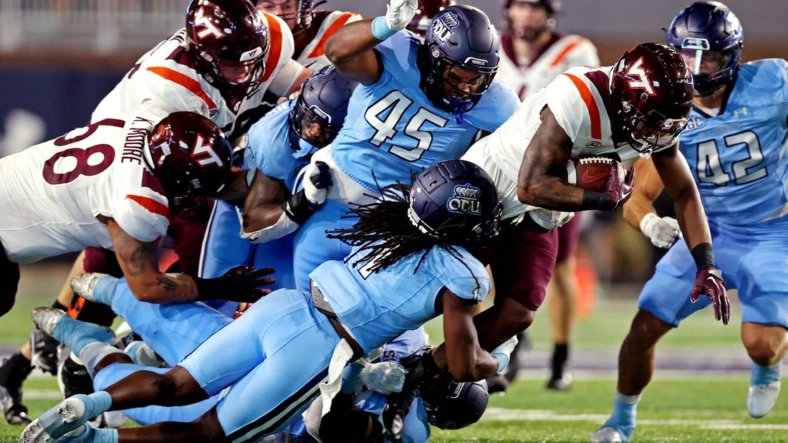 Blake Watson scored on a 1-yard plunge with 33 seconds left as Old Dominion stunned Virginia Tech for the second time at home in the last four years. The Monarchs also ruined the head coaching debut of the Hokies’ Brent Pry, formerly the defensive coordinator at Penn State.

Mistakes haunted Virginia Tech (0-1) throughout as quarterback Grant Wells threw four interceptions. Old Dominion’s other touchdown came on the return of a recovered fumble. The Hokies committed 15 penalties that accounted for 121 yards.

Keshawn King rushed 19 times for 111 yards to lead Virginia Tech. King also scored on a 6-yard touchdown pass from Wells to give the Hokies a 17-10 lead in the third quarter.

Old Dominion answered with the game’s final 10 points. A costly pass-interference call on a fourth-down play set up a 20-yard field goal by Ethan Sanchez that cut the deficit to 17-13.

Virginia Tech had a chance to wrap it up late, driving into Old Dominion territory, but Ryan Henry picked off a Wells pass with 2:58 left, giving the Monarchs possession at their own 26.

From there, Wolff directed the game-winning drive. He finished 14 of 35 for 165 yards. Ali Jennings III caught five passes for 122 yards.

Wells completed 21 of 36 passes for 197 yards and one TD. The transfer from Marshall also scored the game’s first touchdown on an 18-yard run.

The Monarchs’ lone touchdown in the first half came when a Hokies field-goal attempt went awry. A high snap from center sent the ball downfield, triggering a scramble. Robert Kennedy III eventually scooped the ball on the run and scored on a 25-yard return to give Old Dominion a 10-7 lead.