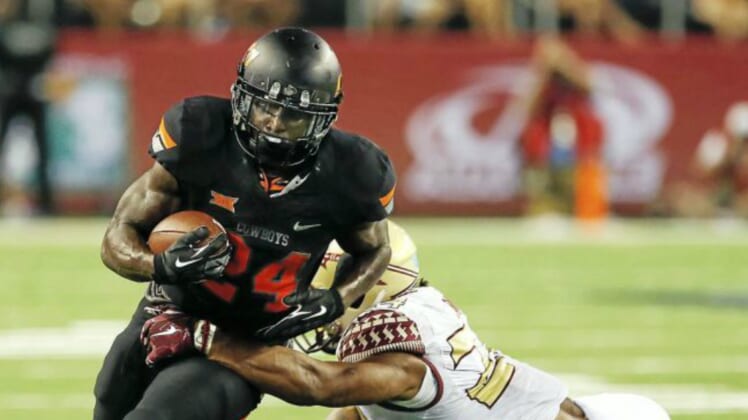 Speed burns, but even the most talented athletes cannot outrun the long arm of the law.

According to the Tulsa World, star Oklahoma State University running back Tyreek Hill was arrested on Thursday night in Stillwater, Oklahoma. Hill allegedly got into a physical altercation with his 20-year-old girlfriend and assaulted her, striking her in the face and stomach and choking her. The woman in question, who’s name will not be released due to sensitivity of the situation, also is eight weeks pregnant with a child that she claims to be Hill’s, and was concerned about the fetus’ well-being after the attack.

The police report had some fairly galling details of the encounter:

Hill is a two-sport star who has thrived since arriving at Stillwater in 2014. He was voted as the Big 12’s Offensive Newcomer of the Year and sits at 11th nationally in terms of all-purpose yardage. While Oklahoma State is set to play the Washington Huskies in the TicketCity Cactus Bowl on January 2, there is no word yet on whether Hill will be allowed to play.

Domestic violence has long been ignored by many in football circles, but recently, after the infamous Ray Rice incident and cover-up this fall, it has become a major point of emphasis for disciplinarians across both the NFL and NCAA. Florida State’s star running back Karlos Williams came under similar scrutiny when he was connected to a domestic violence incident this past October. However, it should be noted that Williams was not charged nor suspended for his actions.

UPDATE: Oklahoma State University has announced that Tyreek Hill has been dismissed from the football and track teams, per Jake Trotter of ESPN. Per the school’s statement, an independent team will continue to investigate the incident.