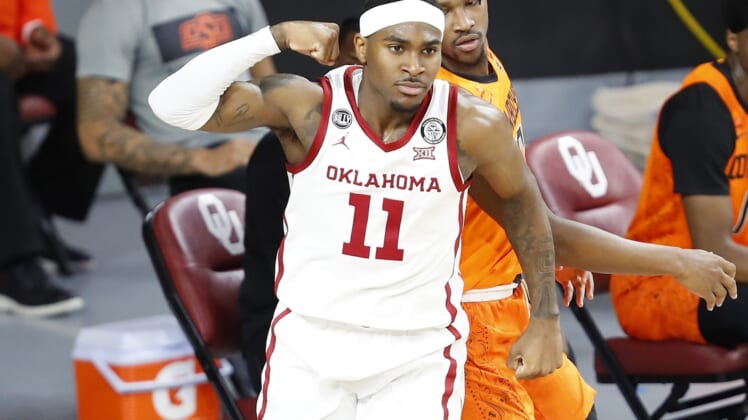 Harmon tested positive on Monday in Indianapolis and is now in quarantine. He also is slated to miss a possible second-round game should the eighth-seeded Sooners (15-10) defeat the ninth-seeded Tigers (16-9).

“De’Vion, he’s feeling fine, no symptoms,” Kruger said in a press conference. “Nothing that would hurt him physically at this point.

“The team is disappointed for him. Others have been through it so they know how disappointing it is. De’Vion is handling it like you might expect — very disappointed to not be playing.”

According to Kruger, no other Oklahoma players are involved per contact tracing.

“It definitely hurts,” said leading scorer Austin Reaves. “De’Vion’s a really good player with a lot of talent and helps us in a lot of different aspects. … This is the way we live now. We’ve been affected by it a couple times and you really just got to keep moving forward.”

Alondes Williams, who started Oklahoma’s first 14 games, is expected to return to the starting lineup in place of Harmon. Williams averages 6.4 points and 2.8 rebounds.

The winner of the Oklahoma-Missouri contest is expected to face top-seeded Gonzaga on Monday, with the Bulldogs set to face either Appalachian State or Norfolk State in the first round.