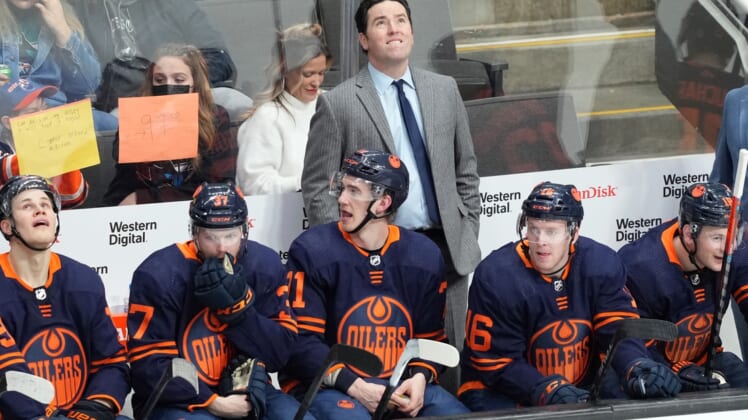 The Winnipeg Jets and Edmonton Oilers have sharpened their play and are riding strong winning stretches as they head into their last of three regular-season matchups Saturday afternoon in Winnipeg.

They split the previous meetings, with each team winning at home: The Jets won 5-2 on Nov. 16, and the Oilers 2-1 two days later.

Grounding the soaring Jets is simply another demanding test for Edmonton and new coach Jay Woodcroft.

So far, those test scores have been worthy of the honor roll.

On Dec. 1, the Oilers were cruising at 16-5-0 and sat atop the Pacific Division — one point ahead of provincial nemesis Calgary — but over the next two months, they won only seven of their next 23 games as their promising season seemed to evaporate.

That’s when they fired coach Dave Tippett, and in the past four games they have rallied under Woodcroft to four successive wins by a goal margin of 18-6. That run has put them back in playoff position, in third place in the division.

In Edmonton’s 7-3 romp over Anaheim on Thursday, the Oilers spotted the Ducks two goals before scoring five in a row to pull away.

“(Woodcroft) has obviously come in and made some changes, but I think, all in all, players got to want it,” said veteran Oilers goalie Mike Smith. “You got to want it as a player. You got to want to win and do anything it takes to do that.”

Leon Draisaitl scored twice against Anaheim — giving him an NHL-leading 35 goals — and was one of seven Edmonton players with two-point performances.

“We’ve asked everybody to up the work rate,” said Woodcroft, 45, who previously worked as an assistant under Todd McLellan in San Jose and Edmonton and most recently coached the Oilers’ AHL affiliate Bakersfield Condors. “We’re asking the team to play a certain style, a demanding style, and very happy that the team is seeing results.”

The Jets, meantime, are 4-1-1 in their past six games. Thursday, they trailed the expansion Seattle Kraken 2-0 late in the first period, but Dominic Toninato’s shorthanded marker with 13 seconds left awakened the Central Division side.

During its second penalty-kill situation, Dylan DeMelo banked an outlet pass to Adam Lowry, who fed Toninato to finish a two-on-one breakout and slash the deficit in half.

“(A short-handed goal) is huge,” Toninato said on TSN’s broadcast. “You try to get that momentum back going into the second period.”

Added Jets interim coach Dave Lowry: “It gave us life. I liked the response how we came out in the second, and how we controlled the play.”

Josh Morrissey tallied the game-winning marker with 6:10 left in regulation, and Kyle Connor’s last-second empty-netter finished off the 5-3 triumph.

Blake Wheeler produced a goal and an assist and has collected 11 points (three goals, eight assists) in his past four games.

In his ninth appearance, backup netminder Eric Comrie improved to 5-2-1 by denying 20 of 23 Seattle shots.

As for Edmonton, forward Jesse Puljujarvi could be out 3 to 4 weeks with a lower-body injury, according to published reports. The No. 4 overall selection in 2016 was injured against Anaheim.