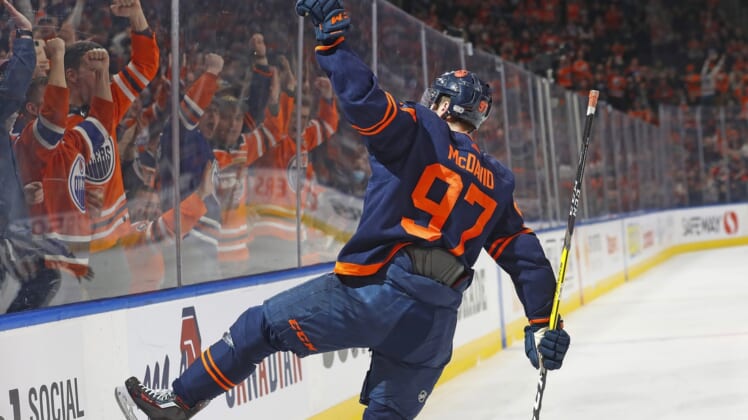 Ryan McLeod scored twice in a career-best three-point game while Leon Draisaitl notched one goal and one assist as the host Edmonton Oilers claimed a 6-1 victory over the Arizona Coyotes on Monday.

Clayton Keller replied for the Coyotes, who have lost six straight games (0-5-1). Goalie Karel Vejmelka stopped 30 of 35 shots before being mercifully pulled after two periods. Josef Korenar made six saves in relief.

McDavid sent the hosts off and running 4:05 into the affair with his 36th goal of the season. Puljujarvi intercepted a clearing attempt and fed McDavid at the net, and he lifted a backhand to run his league-leading point total to 98.

McLeod doubled the lead just past the midway point of the opening frame. After leading a rush into the offensive zone, McLeod was at the end boards with the puck and banked a shot off Vejmelka and into the net.

Keller’s power-play goal — he ripped a five-hole shot home from the right face-off dot — put the Coyotes on the board with 4:08 remaining in the first period, but the Oilers pulled away with a trio of second-period goals.

McLeod notched his second of the game, and eighth of the season, at 2:32 of the middle frame when he tucked home a backhand for the power-play tally.

Foegele made it a three-goal edge at 12:28 when he buried the rebound after Tyson Barrie’s point shot was denied to net his ninth of the season. Then Hyman notched his career-high 22nd of the campaign by converting another rebound at 16:11 of the period.

Draisaitl moved into a tie with Toronto’s Auston Matthews for the league lead with 48 goals when he converted a tap-in set up by Puljujarvi in the middle of the third period. Draisaitl has collected 17 points (10-7-17) in a nine-game streak.

On top of the loss, the Coyotes forward Lawson Crouse left the game after the second period due to injury.