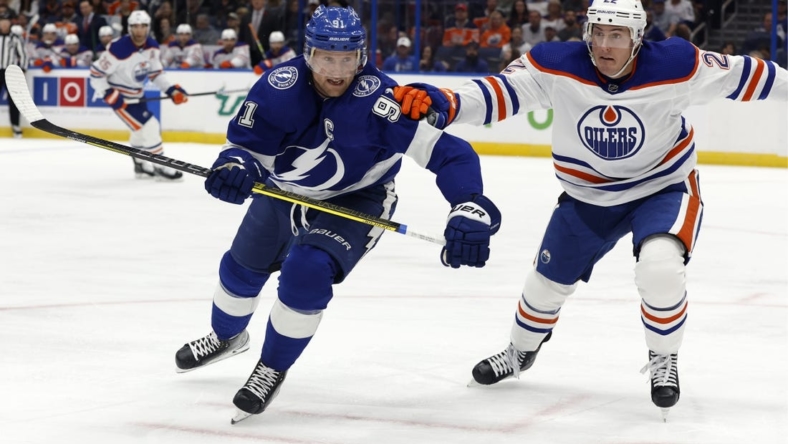 Edmonton’s Connor McDavid and Leon Draisaitl scored power-play goals in the second period as the Oilers held on to beat the host Tampa Bay Lightning 3-2 on Tuesday night.

Warren Foegele scored his first goal on a short-handed marker. After getting Monday’s game at the Washington Capitals off, Jack Campbell was back in net and stopped 35 shots.

Oilers left winger Evander Kane was stable and transported to a local hospital for a procedure following a serious left wrist laceration in the second period.

After Tampa Bay went on the first power play, the Oilers — who allowed four power-play markers to the Capitals — took advantage on Victor Hedman’s whiffed pass. Foegele stole it and ripped his club’s first shot on goal at 7:45 of the first period, scoring with his team short-handed.

Playing on a line with Kucherov and Point, Hagel hit the net for the fifth time at 9:53 when he ripped home a pass from Kucherov.

On its first power play at 2:09 of the second period, Edmonton took its second lead when McDavid flipped in his 14th goal on a rebound.

Following the deep cut to Kane, whose left wrist was sliced open by the skate blade of Pat Maroon at 3:27 of the period, the Oilers needed nine seconds on their second power play to take a 3-1 lead.

Draisaitl did it by backhanding his ninth goal as the visitors tallied twice on the man advantage in a span of 1:58. That gave the club’s second-ranked power play unit its 17th goal in 50 chances.

Just 49 seconds into the third, Killorn cut the deficit to one when he potted his fourth goal, with Point handing out his second assist.

The Lightning pushed hard in the final two minutes with Vasilevskiy on the bench for the extra skater, but Campbell made eight saves in that span to move Edmonton to 4-1-0 on the road.