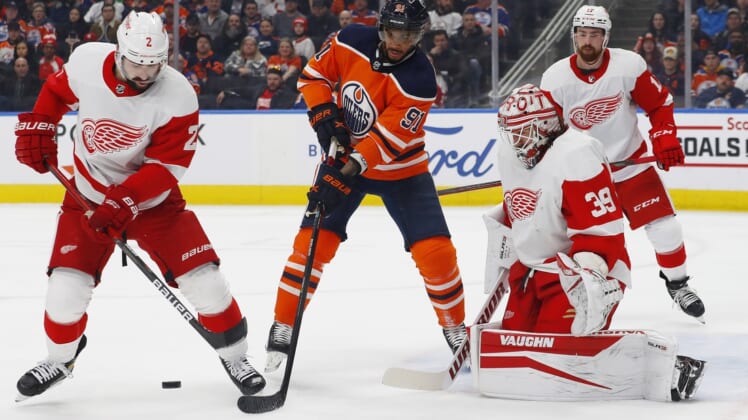 Evander Kane scored twice and Warren Foegele recorded the winning goal with 5:25 remaining to help lift the Edmonton Oilers to a 7-5 home win over the Detroit Red Wings on Tuesday.

After Foegele scored to make it 6-5, Kane scored an empty-net goal with 1:09 remaining to seal the win for Edmonton, which has won three in a row.

Detroit has lost six in a row and eight of its last nine.

Edmonton jumped all over Detroit early, scoring three goals in the initial 4:35.

Detroit got on the board with 11:14 remaining in the first on a goal by Marc Staal, but the Oilers got the goal back when Kailer Yamamoto scored on a power play with 1:23 to go.

The score remained 4-1 until late in the second period, when Detroit cut its deficit to 4-2. Sam Gagner fired a shot from a bad angle to the right side of the goal, and it got past Edmonton goalie Mikko Koskinen with 1:54 remaining.

Detroit then continued its momentum in the third, tying the game at 4-4 on two quick goals.

Filip Zadina scored a power-play goal with 17:42 remaining, then Staal followed that up 34 seconds later with his second score.

Edmonton regained the lead at 5-4 on a goal by Kane with 15:45 remaining, but Detroit tied it again with 13:28 left on a goal by Lucas Raymond.