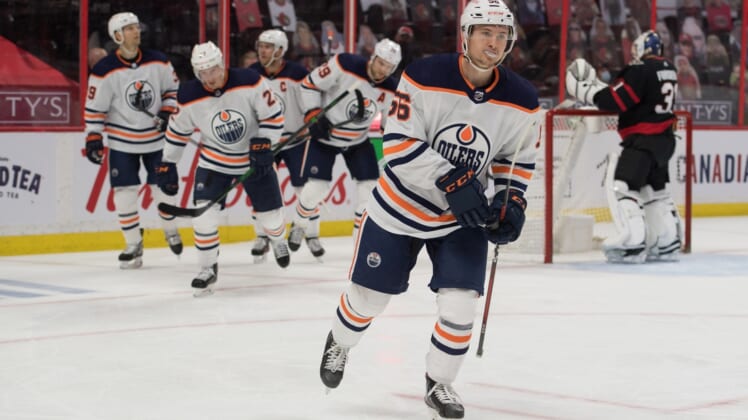 Kailer Yamamoto, Devin Shore and Jesse Puljujarvi each scored goals Thursday as the visiting Edmonton Oilers earned a 3-1 victory to finish off a perfect 9-0-0 regular season against the Ottawa Senators.

Shore’s go-ahead score came from just in front of the Senators’ goal with 7:02 remaining when he redirected Caleb Jones’s shot from near the blue line through the legs of Senators goaltender Anton Forsberg.

Goaltender Mike Smith had 39 saves as the Oilers defeated the Senators for the second consecutive night. A night after Edmonton’s Leon Draisaitl and Connor McDavid recorded four points each, the dynamic duo combined for just four shots on goal, all from McDavid.

Connor Brown scored a goal for the Senators to extend his NHL-best active scoring streak to six games. Forsberg had 20 saves for Ottawa.

Determined not to go winless against the Oilers in the season finale between the teams, the Senators kept the potent Edmonton offense in check during a scoreless first period. The Senators took 10 shots in the opening 20 minutes to just five for the Oilers.

The Oilers struck first for a 1-0 lead on a power-play goal from Yamamoto but that initial score did not come until the 11-minute mark of the second period.

Getting a chance to operate on the Oilers’ man advantage, Yamamoto scored his eighth of the season when he cleaned up a loose puck in the crease that Forsberg was unable to find. McDavid ended up with his NHL-leading 46th assist on the play, while Tyson Barrie picked up his 30th.

The Senators tied the score 1-1 with 1:57 remaining in the second period when Brown scored his 12th of the season to extend his goal streak. Chris Tierney delivered a back pass to Brown, who scored from near the left face-off circle.

Puljujarvi scored an empty-net goal from center ice with just under 10 seconds remaining, his ninth.

The last-place Senators, who kept up their energy throughout, had a 26-13 advantage on shots through two periods and finished with a 40-23 advantage for the game.