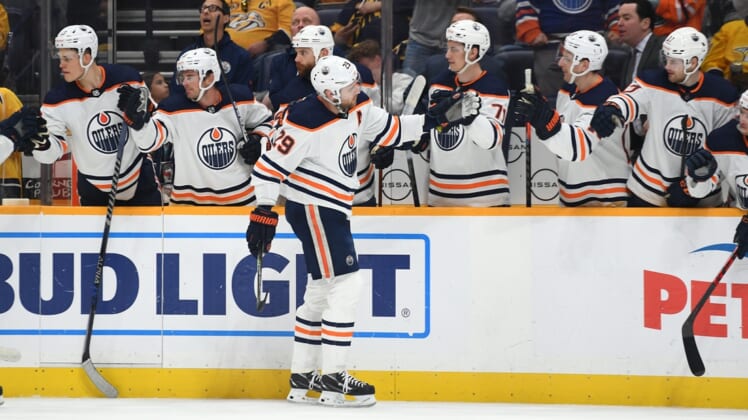 Leon Draisaitl’s hat trick helped the Edmonton Oilers snap a two-game losing streak with a 4-0 road victory over the Nashville Predators on Thursday.

Darnell Nurse also scored a goal while Ryan Nugent-Hopkins and Connor McDavid each had two assists for Edmonton (43-26-6, 92 points). Draisaitl scored at least three goals in a game for the sixth time in his career and the second time this season.

Edmonton goalie Mike Smith made 30 saves for his first shutout of the campaign and the 43rd of his career.

Draisaitl opened the scoring by sending a wrist shot past Saros on a power play at 8:56 of the first period.

At 12:36 of the second, Draisaitl found the back of the net once more and made it 2-0. Edmonton’s Zach Hyman intercepted a pass in the defensive zone, took the puck all the way behind the net at the other end of the rink and fed a pass out from that Draisaitl converted.

Less than three minutes later, during the final seconds of roughing penalty called on McDavid, Nurse went on a breakaway and scored on a short-handed snap shot to give the Oilers a 3-0 lead.

At the 3:45 mark of the third period, Colton Sissons got a wrist shot past Smith, but Edmonton coach Jay Woodcroft successfully challenged that the Predators were offside in the buildup.

With 9:41 left, Draisaitl scored his third goal of the night and 54th of the season on an Oilers power play. McDavid and Nugent-Hopkins had the assists.

The Oilers, who hold second place in the Pacific Division, extended their lead over the idle third-place Los Angeles Kings to four points.

The Predators and the Stars are now tied for the two Western Conference wild-card spots after Dallas got a point for a 3-2 overtime loss to the Minnesota Wild on Thursday.