Oilers out to defend home winning streak vs. improving Blues 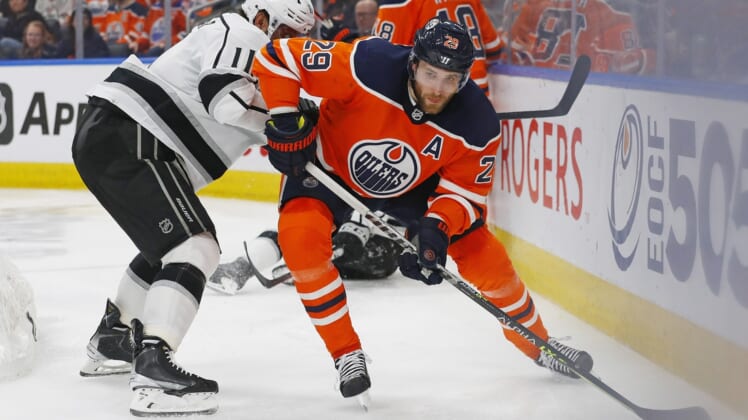 Connor McDavid already has become the first NHL player this season to reach the 100-point mark — for the fifth time in his career — and Leon Draisaitl needs one more goal to earn his second career 50-goal season.

But the Edmonton Oilers head into Friday’s home date with the St. Louis Blues looking for to continue a more important run of rarified air.

Having won eight straight games at home, the latest a 4-3 shootout win over the Los Angeles Kings on Wednesday, another victory would tie for the longest home-ice run in franchise history and loom large in Edmonton’s push up the Pacific Division standings. The Oilers head into the clash sitting third in the division, but division leading-Calgary Flames and the second-place Kings are not out of reach.

“That is something that needed to improve from over the last couple of years. So far this season we have done that,” Draisaitl said. “We want to make this building a tough building for other teams to come in to and a hard building to play in. I think we have done a good job of that lately.”

“The rate that both are scoring at, and the consistency that they bring every single night putting up points is impressive,” defenseman Cody Ceci said. “That is what kind of drew me here in the summertime (as a free agent), the chance to play with these guys and see how far we can go.”

The Blues arrive in Edmonton on the heels of claiming both halves of a home-and-home series with the Vancouver Canucks. St. Louis claimed a 4-3 road victory on Wednesday to kick off a three-game road swing that ends with a clash against the Flames on Saturday.

The Blues have an impressive 13-3-2 record against Pacific Division teams this season, but they are happier about drumming up consecutive wins after posting a 3-6-3 run prior to meeting the Canucks. Vancouver appears to be fading from the playoff picture, but positive momentum is important.

“And it’s a good time to be doing it,” said defenseman Nick Leddy, whose goal in Vancouver was his first since being acquired from the Detroit Red Wings at the trade deadline. “But we have some very good teams up ahead, and looking forward to the challenges.”

Wednesday’s win was tighter than it should have been, with Vancouver’s Elias Pettersson scoring a late goal to bring the hosts within one and setting up a frantic finish. Nonetheless, the Blues believe they are putting their game back in order after a difficult few weeks and are back in the hunt for home-ice advantage in the opening round of the Stanley Cup playoffs.

“Something to build on for sure,” forward David Perron said. “We got to (win) like four or five in a row before we start thinking that we got something going here.”

Blues forward Jordan Kyrou returned to practice Thursday after he missed Wednesday’s game due to illness, but there is no word on whether he will play Friday. Kyrou leads St. Louis with 62 points.