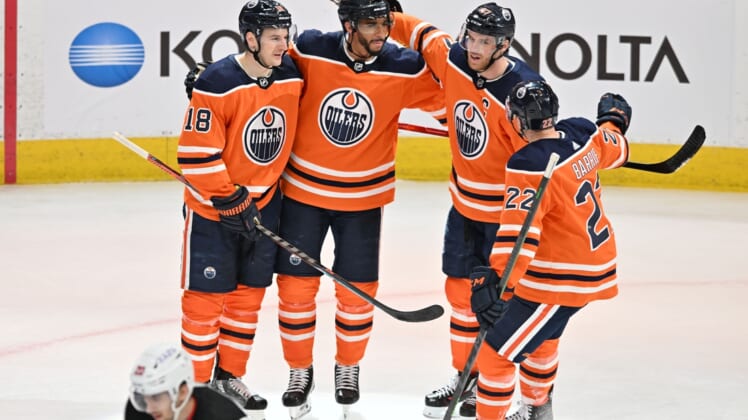 Things were looking a little dire for the Edmonton Oilers two weeks ago. Edmonton just lost its third straight and was in the midst of 2-5-1 stretch, but fortunes changed quickly for the storied franchise.

The offense woke up, and so did the Oilers’ postseason prospects. Now riding an NHL-best five-game winning streak, Edmonton will visit the Colorado Avalanche for a key matchup on Monday night.

Edmonton’s streak has been bolstered by a spate of goals. The Oilers are averaging 5.4 goals over the last five games and three times have scored six or more goals.

“A couple wins in a row can really change the mindset and get the belief a little higher,” said Evander Kane, who had two goals in a win over New Jersey on Saturday night and has 12 goals and 20 points in 23 games since signing with the Oilers. “We got healthy and started playing a lot tighter as a unit of five and that’s really helped our game and led to success.”

Things can look even more different when the puck drops Monday night. The trading deadline is Monday afternoon, and both the Oilers and Colorado are rumored to be looking at adding talent for the playoffs.

On Sunday Edmonton waived center Kyle Turris, who had played in just one game since Jan. 22. If the Oilers stand pat, they already made a big splash by signing Kane earlier in the season.

“I see great potential in this team. That’s why I came here,” Kane said. “I think you’re starting to see what it can look like.”

The Avalanche have made a couple of moves but didn’t add big names. They traded for defenseman Josh Manson and forward Nico Sturm in the last week, adding size to the lineup. Colorado has won three in a row after dropping four of its previous five, and its 93 points are the most in the NHL.

If the Avalanche don’t make any more deals, they are still poised to make a deep postseason run. Colorado’s offense is still potent despite Gabriel Landeskog (knee surgery) being out until late April, and it has one of the best young defensemen in the game in Cale Makar.

Makar, in just his third full season, is making a case to win the Norris Trophy. He plays solid defense and has 22 goals, the most by a defenseman, and his 69 points are second in the NHL for his position.

He has impressed his new teammates, who will make their home debuts Monday night.

“You’ve got to start picking and choosing when you say stuff to him because every time he gets off the ice you want to say ‘good play,’ good play, good play, nice play,'” Manson said after practice on Sunday.

Monday will be the first of three meetings between the teams this season, with the last two happening in Edmonton in April. The Avalanche are starting a three-game homestand on Monday with a chance to put a stranglehold on the No. 1 seed in the Western Conference.