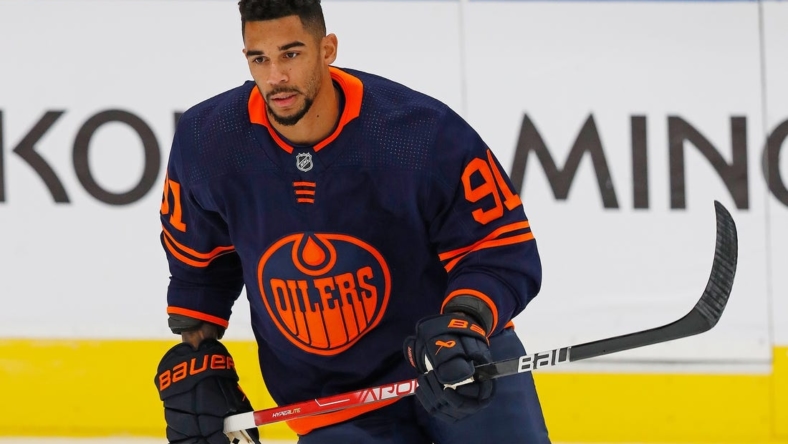 Edmonton Oilers forward Evander Kane said Wednesday that he looks forward “to being back on the ice,” mere hours after undergoing surgery on his lacerated wrist.

“Thank you all for the kind wishes and prayers from over the past several hours,” Kane wrote Wednesday on Twitter. “Obviously last night was an extremely scary moment for me and I’m still in a little bit of shock.

“I would like to thank the entire training staff of the Edmonton Oilers and Tampa Bay Lightning, along with all the doctors and paramedics who rushed to help treat and repair my injury. Without all of you I know things would’ve been much worse and I’m sincerely grateful. I won’t be back next game, but I will be back and I look forward to being back on the ice playing the game I love alongside my teammates in front of our great fans.”

On the mend, thank you ?? pic.twitter.com/8ZN7K5KAfc

Kane, 31, sustained a lacerated left wrist during the second period of the Oilers’ 3-2 win over the Tampa Bay Lightning on Tuesday. He dropped to the ice after getting tangled up with Lightning defenseman Philippe Myers before Patrick Maroon accidently skated over his wrist.

With a sizable pool of blood on the ice, Kane got up, grabbed his bleeding wrist and headed frantically to the Edmonton dressing room 3:27 into the period with the Oilers ahead 2-1.

The game was then stopped as medical staff headed to the visitors’ dressing room and play soon resumed.

“That’s a scary situation and I hope he’s OK,” Maroon said after the game. “When you look down and you see that much blood, you know there’s something wrong. Obviously, the boys are really worried about him. … Hopefully he’s good right now. … Obviously, Evander, we’re thinking of you.”

Maroon added, “You never wish that upon anyone, any player in the league. We wear blades on our skates and they’re obviously sharp.”

Kane has 13 points (five goals, eight assists) in 14 games this season with Oilers. He is in the first season of a four-year, $20.5 million contract.

Kane has 558 points (291 goals, 267 assists) in 826 career games with the Atlanta/Winnipeg franchise, Buffalo Sabres, San Jose Sharks and Oilers. He was selected by the Thrashers with the fourth overall pick of the 2009 NHL Draft.