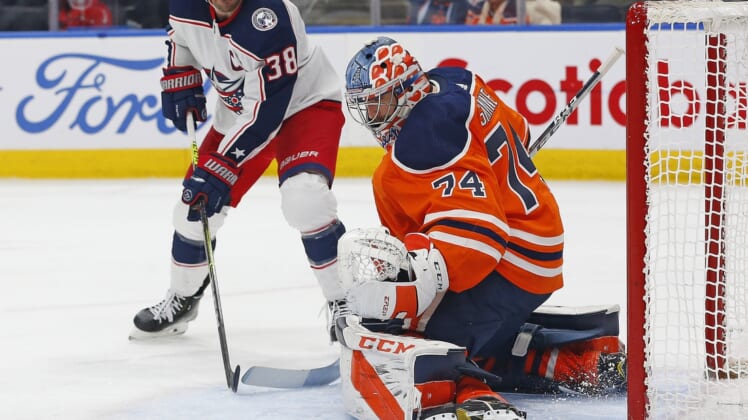 Jesse Puljujarvi scored two goals in a 46-second span of the first period and the Edmonton Oilers went on to a 5-2 win over the visiting Columbus Blue Jackets on Thursday night, ending a six-game losing streak.

Brendan Perlini had a goal and an assist for the Oilers, who had scored six goals in their past five games. Stuart Skinner made 36 saves.

Gustav Nyquist and Justin Danforth scored for Columbus, while Elvis Merzlikins stopped 25-of-29 shots over two periods. Joonas Korpisalo replaced Merzlikins in the final period and stopped all 15 shots he faced. The slumping Blue Jackets have lost eight of ten games (2-7-1).

The Oilers, who had fallen behind 2-0 in each of their past five games, took advantage of a 5-on-3 power play early in the game to take a 2-0 lead.

Edmonton made it 1-0 at 7:24 off the first period when Tyson Barrie’s shot went off the end boards to Puljujarvi, who scored on a back-hander.

Puljujarvi increased the lead to 2-0 at 8:10 when he scored his 10th goal of the season, converting a power-play goal from the slot to complete a tic-tac-toe passing sequence started by Connor McDavid and Ryan Nugent-Hopkins.

Perlini pushed the lead to 4-0 at 16:41 of the second period when he knocked home a loose puck from the slot off the rebound of Zack Kassian’s shot.

Nyquist got the Blue Jackets on the board at 6:28 of the third period when he knocked in the rebound of Cole Sillinger’s shot.

Puljujarvi missed on a bid for the hat trick later in the period when he shot wide off a pass from McDavid on the rush.

Zack Werenski set up the second Columbus goal when he skated through two Oilers and got a shot on goal. Stuart made the save but Danforth scored off the rebound at 16:36.

Columbus pulled Korpisalo with over three minutes remaining and Warren Foegele scored into the empty net at 17:06 off a pass from Puljujarvi for the 5-2 final.