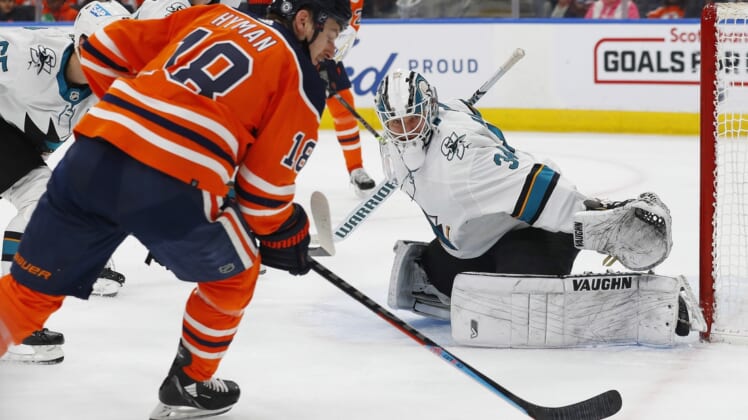 Kailer Yamamoto, Evander Kane and newcomer Derick Brassard also tallied as the Oilers improved to 6-1-1 in their past eight games. Goaltender Mike Smith made 28 saves.

Erik Karlsson and Tomas Hertl scored for San Jose, which had a two-game winning streak snapped. Goalie Kaapo Kahkonen, making his Sharks debut after being acquired from Minnesota at the NHL’s trade deadline Monday, stopped 36 of the 40 shots he faced.

Draisaitl moved into sole possession of second place in the league’s goal-scoring race at 7:39 of the second period, breaking a 1-1 tie and giving the Oilers the lead for good. Zack Kassian’s forecheck forced a turnover along the right-wing boards in San Jose’s end and Draisaitl picked up the loose puck and shot it under Kahkonen’s pads on a wrist shot from just inside the faceoff dot.

Draisaitl scored his 44th of the season, two behind Toronto’s Auston Matthews, on the power play at 13:55 of the third by redirecting Connor McDavid’s pass into the net from just outside the top of the crease.

Kane added an empty-netter against his former team at 17:18.

Karlsson broke a scoreless tie at 1:08 of the second, tapping the puck into the net after a nifty cross-ice pass from Hertl.

The Oilers tied it on the power play at 4:34 of the period as Yamamoto drove to the net and slid a backhander between Kahkonen’s pads.

After Draisaitl gave the Oilers a 2-1 advantage through two periods, Brassard, acquired Monday from Philadelphia, extended the lead at 6:49 of the third as his pass from the left point deflected off Karlsson’s skate and into the net.

Hertl pulled the Sharks back within a goal just 29 seconds later, taking a pass from Meier and scoring on a one-timer from between the hashmarks.

Ryan Nugent-Hopkins returned to the Oilers’ lineup after missing 12 games with an upper-body injury. Brett Kulak made his Edmonton debut after coming over in a deadline deal from Montreal.