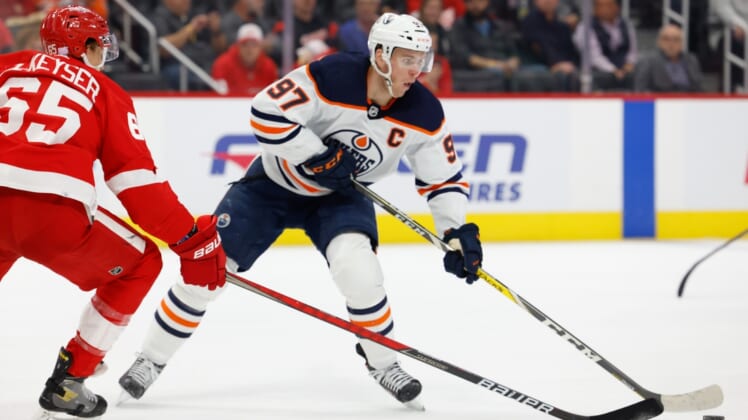 The Edmonton Oilers have already collected two victories to start their five-game homestand. They’ll look to keep trending in the right direction when they host the struggling Detroit Red Wings on Tuesday.

Edmonton snapped a three-game winless streak with an overtime victory over Washington on Wednesday. The Oilers then manhandled two-time defending Stanley Cup champion Tampa Bay in a 4-1 triumph Saturday.

As usual, Connor McDavid and Leon Draisaitl delivered most of the offensive punch against the Lightning. McDavid scored two goals, increasing his point total to 83. Draisaitl had a goal and an assist, giving him 81 points.

There were plenty of man-advantage situations during the contest. Edmonton went 1-for-7 on the power play while Tampa Bay was 0-for-4.

“I think it was just an all-around effort,” Draisaitl said. “Our PK was really good. I think our power play could’ve been sharper, but we did score a big goal to make it 2-0 at the end of the second there. You’ve got to find the right times to score sometimes, too, so we did that. At 5-on-5, I thought we were really solid.”

“I think he’s driven to win; driven to lead this team forward to continually push the needle to get this team to where it needs to get to,” coach Jay Woodcroft said. “I think he led by example (Saturday) He was extremely dangerous with the puck on his stick. I’ve enjoyed his defensive details over the last while, and he scored the first two goals on difference-making plays.”

The Oilers will need their superstar to continue making those plays in order to secure a playoff berth. They have 68 points but 11 other Western Conference teams have at least 64.

“We have a way we want to play the game,” Woodcroft said. “It’s the right way of playing hockey, which is limiting the chances that you’re giving up and creating more than the other team.”

The Red Wings have lost five straight and seven of their last eight. Detroit held Calgary to three goals Saturday after allowing 21 goals in their previous three games. However, the Red Wings failed to score, their first shutout loss since Winnipeg blanked them on Jan. 13.

Their offense took a hit last week when Robby Fabbri suffered a season-ending knee injury. Another forward, Tyler Bertuzzi, is ineligible to play in Canada due to his vaccination status.

The score on Saturday could have been even more lopsided. The Wings were outshot 43-19.

“We defended the whole time,” coach Jeff Blashill said. “We had no shots at all. It wasn’t like we were passing up shots, we weren’t in their end. The shots were indicative of the game over the first two periods.”

The Red Wings will be making their second stop on a four-game road trip. They’ll also visit Vancouver and Seattle this week.

“Guys have to play better, there are no other ways to put it,” Blashill said. “There are opportunities there for more ice time.”

In their first meeting with Edmonton, the Wings collected a 4-2 home win on Nov. 9 as Vladislav Namestnikov scored two goals.