Oilers clinch 2nd in Pacific with OT win over Sharks 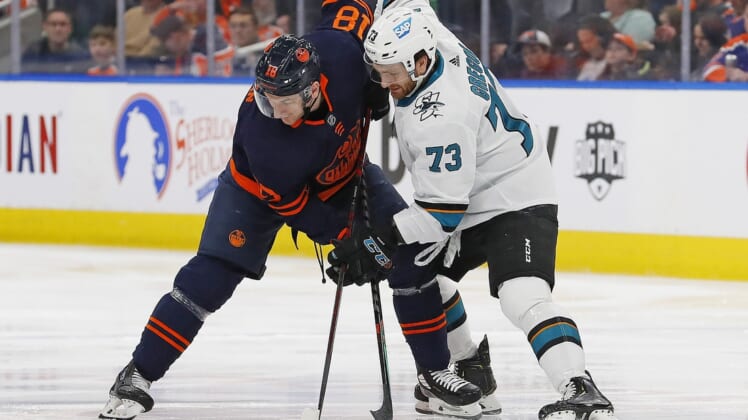 Zach Hyman scored the overtime winner to give the host Edmonton Oilers a 5-4 comeback victory over the San Jose Sharks on Thursday.

Ryan McLeod, Kailer Yamamoto, Derek Ryan and Philip Broberg also scored for the Oilers (48-27-6, 102 points). Goaltender Mikko Koskinen made 39 saves for Edmonton, which has a 13-0-1 record in its last 14 home games.

Oilers captain Connor McDavid collected one assist, which gives him 123 points and an eight-point lead in the league’s scoring race.

Upon taking a cross-ice feed, Hyman buried a one-timer from the slot 97 seconds into the extra frame for his 27th goal of the season.

Edmonton claimed second place in the Pacific Division and will face the Los Angeles Kings in the opening round. The Sharks are eliminated from playoff contention.

Gregor, who hails from just outside Edmonton, notched a pair of goals 26 seconds apart early in the first period, the first when he ripped a shot inside the far post at the 2:42 mark. His second was a pass attempt from that banked off the skate of a defender for his eighth of the campaign.

McLeod’s power-play goal just before the midway point of the second period — coming when he pounced on a rebound for his ninth of the year — put the Oilers on the board, and Yamamoto reached the 20-goal mark when he lifted a forehand at the 12:52 of the period.

Bonino restored San Jose’s lead 63 seconds later by converting a setup from Logan Couture for his 16th of the season, only to see Broberg net his first NHL goal 65 seconds after that with a wrist shot from the slot.