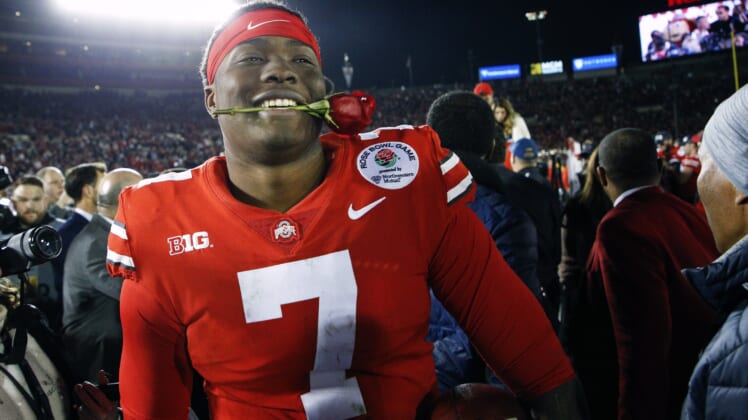 Haskins, 24, was struck and killed by a dump truck as he walked along a Florida interstate on Saturday.

Day said just how the Buckeyes will honor Haskins, their starting quarterback in 2018, is being finalized.

Haskins played for Ohio State from 2016-18. In his final season, he set Big Ten single-season records with 4,831 passing yards and 50 passing touchdowns. He threw just eight interceptions and finished third in the Heisman Trophy balloting behind winner Kyler Murray of Oklahoma and Tua Tagovailoa of Alabama.

He was a first-round draft pick of the Washington franchise in 2019 and more recently was a backup quarterback with the Pittsburgh Steelers.

Day said Haskins remained close to members of the Ohio State program as well as to Day’s own family — all of whom were trying to process Haskins’ death.

“I’m 44 years old now, and I don’t know how to feel,” Day said. “Certainly if you’re 18, 19, 20 years old, you’re just having a hard time with it all, confusing. You try to lean on each other the best you can. What you can’t do is do something or say something you think is going to make it all better. It’s not going to happen. You have to go through the process.”

Haskins had been in South Florida training with Steelers skill position players at the invitation of new Pittsburgh quarterback Mitch Trubisky. He was walking on Interstate 595, near the airport in Fort Lauderdale, when he was struck.

It wasn’t immediately clear why he was walking on the highway.

On Sunday, Florida Highway Patrol spokeswoman Lt. Indiana Miranda told the Miami Herald that the investigation into Haskins’ death is continuing, with a report likely to be made public in about three or four months.

“There is no other updates about the investigation to be released at this time,” she said.