The Ohio State Buckeyes lost a lot of talent to the NFL Draft, but they may have a capable contributor on both sides of the ball in 2021 in Steele Chambers.

Listed at 6-foot-1 and 220 pounds, Chambers has the size to be a speedy, agile linebacker in addition to filling a role at his typical position of running back. Buckeyes coach Ryan Day said at Big Ten media days that Chambers is training at both spots, per Eleven Warriors’ Dan Hope:

A crowded backfield limited Chambers’ opportunities to contribute as a ball-carrier during his first two seasons in Columbus.

With Dobbins and Sermon in the NFL, and the unknown of competing at a new position, what can Buckeyes fans expect from Chambers this season? Let’s take a closer look.

Teague is still in the fold and should be atop the running back depth chart to spearhead Day’s offense. However, Ohio State should put an emphasis on the rushing attack even more than in years past, considering Justin Fields also left for the NFL and was such a phenomenal passer.

C.J. Stroud has big shoes to fill in place of Fields. The greater quantity of fresh tailbacks the Buckeyes can throw at opponents while Stroud gets his sea legs as the starter, the better off they should be. That dynamic bodes well for Chambers to get some serious looks after he logged just 19 carries in 2019 and nine last season.

To be fair, Chambers has put up 7.9 yards per tote, so he’s made the most of his opportunities. It’s just that his greater upside might be on defense. In his high school highlight reel, you can see his clear comfort operating in space, and his ability to close quickly on opponents.

It says a lot that Day would address Chambers’ cross-training to defense publicly. Pete Werner, Baron Browning and Justin Hilliard are all in the pros now from the 2020 linebacker corps. Even with seniors Dallas Gant and Teradja Mitchell expected to step up, it should be pretty wide-open in terms of competition for snaps at the position. 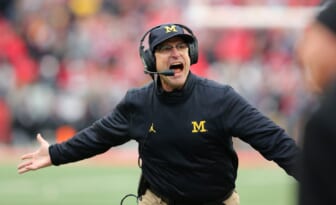 Be prepared, Buckeye faithful: This is a little bit of a reach, yet it’s a useful analogy when assessing Chambers’ skill set. He brings to mind some shades of Darron Lee.

Coming out of New Albany High School, Lee was a versatile dual-threat QB who also shined in the secondary. He wound up being an incredible, playmaking linebacker who went on to be a first-round pick of the New York Jets.

Not to say Chambers has that type of meteoric, unimaginable trajectory in his future. It’s just that Chambers has the similar lateral quickness, experience playing coverage in high school and the physical demeanor to follow the general outline of Lee’s path to success at linebacker.

Even if he approaches anything near Lee’s stratosphere as a college player, Chambers will be a capable contributor on defense for Ohio State — and that’s not to speak of what he could still do at running back.

Chambers could indeed be a secret weapon the Buckeyes deploy at any time to generate a big play. It’s an underrated storyline worth monitoring as the team seeks any edge possible to aid a return to the College Football Playoff.