The Ohio State Buckeyes may wait a while to play freshman phenom quarterback Quinn Ewers, but he’s already cashing in on what figures to be an eventually-electrifying college career in Columbus.

Action Network’s Darren Rovell reported Tuesday that Ewers agreed to terms with GT Sports Marketing on a Name, Image and Likeness endorsement contract worth more than $1 million over three years:

Ewers was 247Sports’ top-ranked recruit in the country for the class of 2022 out of Southlake Carroll in Texas, but at the last minute, he decided to reclassify and arrive to Ohio State a full season early, forgoing the final year of his high school eligibility.

That unprecedented leap to the college gridiron is a move other 5-star prospects may follow in the future, especially now that Ewers is showing the financial upside it entails thanks to the NCAA’s decision to allow Name Image Likeness (NIL) deals.

Redshirt freshman C.J. Stroud has already been named the Buckeyes’ starting QB to kick off the 2021 campaign, and he had to beat out Jack Miller and another true freshman in Kyle McCord during an open competition to get the job. 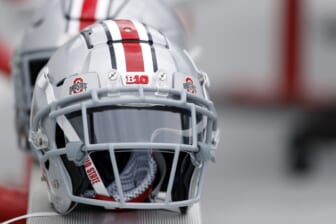 With such a loaded depth chart at the most important position and the understanding he’s starting in fourth by default, it’s telling that Ewers is already getting a seven-figure endorsement contract before stating a legitimate case for playing time.

As his recruiting status suggests, Ewers is a unique talent. His unorthodox three-quarter delivery and blend of arm power and accuracy are uncommon for a teenager to say the least. Plus, he rocks a long, mullet-style hairdo and brings plenty of swagger and confidence to the field, which is bound to inspire Buckeye fans and teammates alike.

See where C.J. Stroud stacks up among the top contenders in our 2021 Heisman Watch

One constant at Ohio State has been quality quarterback play in recent years. After going on a run of Braxton Miller, J.T. Barrett, Cardale Jones and Dwayne Haskins, the Buckeyes got to enjoy Justin Fields for the past couple years.

Now, it seems like head coach Ryan Day can’t go wrong no matter where he turns at QB. What’s crazy is, Ewers just might be too talented to keep off the field even as an early-arrival first-year player, and with Stroud being hyped up a legitimate candidate for the Heisman Trophy.