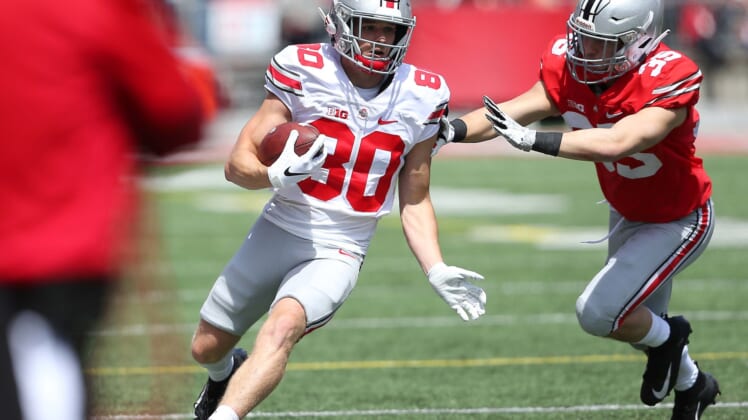 According to Dan Hope of ElevenWarriors.com, per the police report Saunders “was walking from North High Street on West Northwood Avenue at approximately 10:45 p.m. when he was detained by a Columbus Police officer enforcing the city-wide curfew.”

This was 45 minutes after the 10 p.m. to 6 a.m. curfew was enacted. The curfew has been in place since Saturday due to the ongoing protests against police brutality in the wake of George Floyd’s death. Per the police report, “Officers had just dispersed a crowd in violation of the curfew,” when Saunders was arrested.

Saunders was a team captain last season for the Buckeyes. He posted bond Tuesday morning after being booked into Franklin County Jail. He will face a misdemeanor charge of violating curfew on Thursday.

The protest that was taking place before Saunders was arrested had been peaceful, per The Lantern. According to the paper, more than 200 demonstrators took part. Police intervened with pepper spray after the peaceful protest continued following the 10 p.m. curfew.

The police report did not specify whether Saunders was part of the protest.

On Monday evening, Ohio State football released a video supporting #BlackLivesMatter, which Saunders was a part of for the team.

The team’s message went as follows:

“Don’t ignore George Floyd. His senseless killing at the hands of law enforcement has shaken this nation at its core. His death, along with countless others, has once again brought these injustices to the forefront of our society. For far too long, Black Americans have suffered under systems of racism and oppression. This time, it’s different. This time we’ve had enough. As members of the Ohio State football team, we have a platform not only in Central Ohio, but around the globe. With this platform, it is our duty to promote awareness and evoke change. We will no longer stand silent as these issues continue to plague our friends, citizens, neighbors, and teammates. We stand in solidarity with the black community and equal rights for all. This is not white versus black. This is everyone against racism. As a team, we’ve committed ourselves to fight for change. And now, we’re asking for you to join us.”