Ohio State coach Ryan Day said quarterback C.J. Stroud will only be used in an emergency situation on Saturday against Akron due to soreness in his right shoulder.

Appearing Thursday on his weekly radio show, Day said Stroud has taken the last few days off practice to rest his injured shoulder.

Day said quarterbacks Jack Miller III and Kyle McCord will have to be ready when the 10th-ranked Buckeyes (2-1) host the Zips (1-2) in a nonconference game in Columbus.

“Kyle and Jack have done a good job, and so the plan right now is to probably — we’ll see how today goes — but probably use C.J. in somewhat of an emergency capacity on Saturday and play some of those other guys,” Day said on 97.1 The Fan in Columbus. 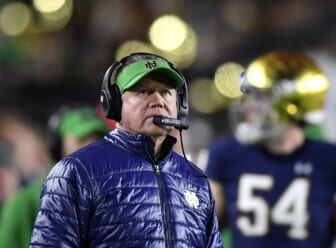 Stroud, a redshirt freshman, has completed 63 of 101 passes for 963 yards with eight touchdowns and three interceptions through three games in his first season as the Ohio State starter.

“It hurts, but life hurts,” Stroud said following last Saturday’s 41-20 win against Tulsa. “Winning is tough. I just have to grind through it.”

Miller, a redshirt freshman, appeared in two games last season, scoring on a 21-yard run in a win against Nebraska. McCord, a true freshman and a five-star recruit in the Class of 2021, has not yet appeared in a game.