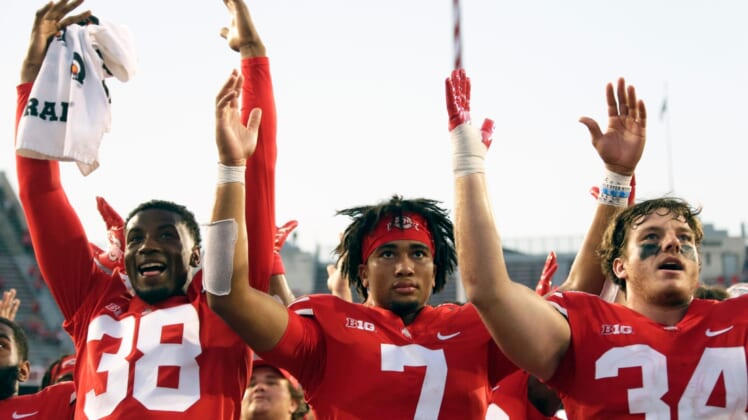 Ohio State still has issues on both sides of the ball, far more than one would expect for a team pegged for a shot at returning to the national title game, but the No. 10 Buckeyes should feel better about themselves after hosting Akron on Saturday.

The Buckeyes (2-1) are a seven-touchdown favorite over the Zips (1-2), who are coming off a 35-14 win over Bryant from the lower-tier Football Championship Subdivision.

Ohio State ran away from its problems when TreVeyon Henderson broke two-time Heisman Trophy winner Archie Griffin’s 49-year-old school record for rushing yards (239) by a freshman in a game during the Buckeyes’ 41-20 victory against Tulsa last Saturday.

Even though Henderson gained 277 yards on 24 carries, the outcome was in doubt until the Buckeyes got 14 unanswered points late.

“I couldn’t be more proud of him,” Ohio State left tackle Nicholas Petit-Frere said. “It’s nice to see all of his work and all of his efforts being paid off.”

Henderson’s historic game masked that redshirt freshman C.J. Stroud through three career starts is still struggling with the passing game while dealing with a shoulder injury.

Receiver Chris Olave, a projected first-rounder for the 2022 NFL Draft, was targeted four times among Stroud’s 25 throws and did not have a catch, although a 47-yarder was wiped out because of an offensive penalty.

Akron quarterback DJ Irons, a transfer from Iowa Central Community College in his first start, accounted for 432 (296 passing, 136 rushing) of the Zips’ 578 total yards against Bryant. His dual-threat capabilities could cause the shaky Ohio State defense problems.

After a 35-28 loss to Oregon on Sept. 11, defensive coordinator Kerry Coombs was demoted from on-field play-calling to the press box and replaced by secondary coach Matt Barnes.

“These first few weeks haven’t been ideal,” Ohio State coach Ryan Day said, alluding to the number of young players used. “I didn’t have many expectations because there were so many unknowns. Here we are, guys that just haven’t played. Until they’re actually in a game, you just don’t know.”

Akron already knows what it’s like to go against a big-time program, having lost its season opener 60-10 at Auburn. That was followed by a 45-24 loss to Temple.

For Zips coach Tom Arth, who is 2-19 in his third season, the win over Bryant was a matter of mental toughness after the score was tied 14-14 in the fourth quarter.

“If that doubt starts creeping into your mind, you’ve got to control it,” he said. “No matter what is done, no matter what happens, the one thing we are in control of is our thought and how we are talking to ourselves.”