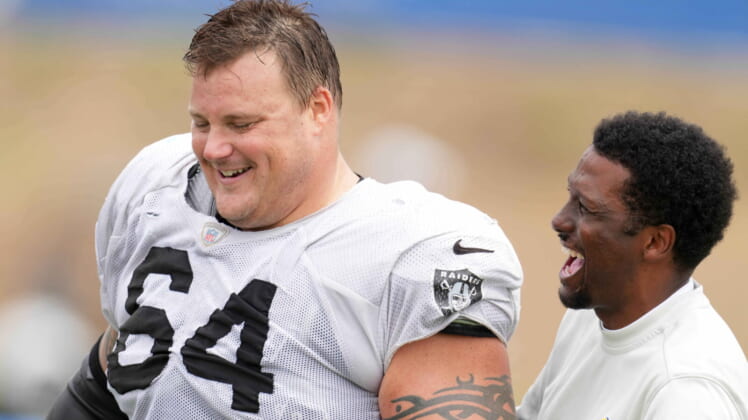 The Silver and Black were already heading into this season with three new offensive line starters.

That number will grow to four as captain and offensive guard Richie Incognito will not suit up as he continues to nurse an injured calf.

Head coach Jon Gruden said although the 6-foot-4 lineman is starting to practice, he is not 100% yet.

“I don’t think he’s going to play, but he’s getting better,” Gruden said of Incognito. “I think there’s a good chance he’ll play in the next game. But for the time being, we’ll let him get well and hope for the best.”

Taking Incognito’s spot at left guard is John Simpson, another 6-foot-4 lineman, weighing 321 pounds. Simpson is entering his second season and was a fourth-round pick in 2020 from Clemson.

Last season, Simpson took over for Incognito when he was sidelined since Week two and played in seven games, in which he got the start twice.

He received snaps at O-Line in five of those seven games and recorded at least 21 snaps at the guard position.

In the two games he started last season – at New England in Week 3 and at Denver in Week 16 – Simpson played every snap.

Gruden has faith in offensive line

Despite there being four new starters to begin the 2021 slate, Gruden said he believes in his young and unproven O-Line.

“Obviously feel really good about him,” Gruden said of Simpson. “Richie missed 15 games last year, basically, and Simpson was a starter for us, started in the Denver game, the last game of the season. He’s a good, young prospect.

“We’re anxious to see our (offensive) line. We know we’ve got four new starters there compared to last year at this time, but we have some players with really big upsides, and this will be a great test for them.”

Even though the team will have 80% of the O-Line new, Gruden said with the experience these players have – at college or at the NFL level – that will benefit them on Monday.

“I think Alex Leatherwood’s been trained pretty good to play in front of big crowds, who’s a two-time national champion,” Gruden said “Andre James is in his third year. John Simpson’s been in a big arena his whole life. So, these guys are anxious to start forming their own identity and they realize they have big shoes to fill. I think they’re confident that they can come together and be a good unit.”

The Raiders have won their last three games on Monday nights, including last year’s 34-24 victory over the New Orleans Saints, which was during the 50th season of Monday Night Football.

The first season of football games on Monday nights dates back in 1970, which is 51 years ago. The Silver and Black won its first Monday Night Football game, 34-20 at the Oakland-Alameda County Coliseum against the then-Washington Redskins in Week five.

The history behind every game special, especially playing on Monday night for the first time of your NFL career, such as rookie safety Tre’von Moehrig.

“I look back at the time you first start playing football and all the memories and all the times you have leading up to this moment,” Moehrig said. “For me, it’s just taking a step back and really enjoying this time and experience since I was a kid of just growing up thinking about this.”

In addition, the Raiders will look to play in front of a sold-out crowd for the first time at Allegiant Stadium against the Baltimore Ravens at 5:15 p.m. on ESPN.