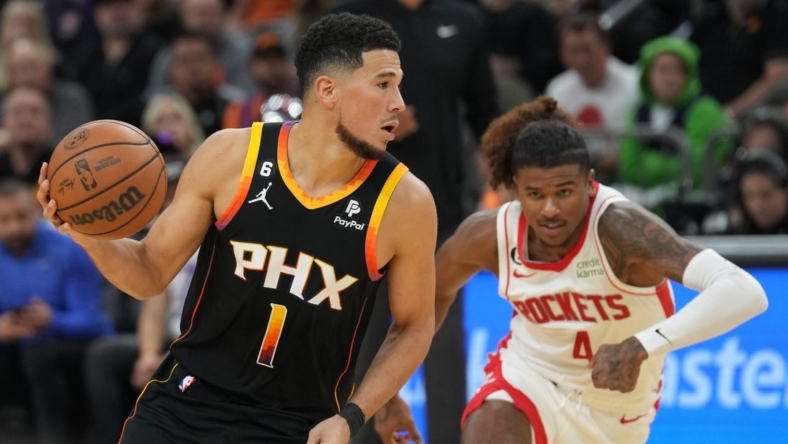 Devin Booker achieved star status two seasons ago when he led the Phoenix Suns to the NBA Finals.

Now in his eighth season, Booker is bordering on becoming one of the elite players in the league and he looks to continue his strong start when the Suns host the Minnesota Timberwolves on Tuesday night.

Booker celebrated his 26th birthday on Sunday with a 30-point outing during a 124-109 home victory over the Houston Rockets.

It marked the fourth time in five games that he has scored 30 or more points. Booker is averaging 29.3 points and shooting 52.9 percent from the field in six games this season.

“I just try to continuously get better and continuously improve,” Booker said afterward. “The thing about basketball — you can never perfect it. But I’m going to try everything in my power to do it.”

Booker has averaged more than 25 points in each of the past four seasons, being the key reason why the Suns went from a floundering franchise to one of the league’s top teams.

“Guys like Book, because they do it so consistently, you kind of take it for granted,” Williams said. “It’s hard to say — he’s only 26. There’s certainly levels for guys to get better.”

Booker wasn’t the only backcourt player getting it done against the Rockets. Veteran point guard Chris Paul contributed a season-high 15 assists, and he leads the NBA with 10.8 per game.

Phoenix will be without center Deandre Ayton (ankle) for the second straight game. That will give Jock Landale another chance to contribute.

The 27-year-old Landale had 16 points and seven rebounds in 23 minutes against Houston. He also had a 17-point performance in a rout of the Golden State Warriors on Oct. 25 while Ayton was still healthy.

Paul has been impressed with Landale’s energy.

“It’s so valuable,” Paul said of Landale. “The energy, the pace that he plays with. He gives himself up so much.”

The Suns went 3-0 against the Timberwolves last season and have won seven of the past eight meetings between the teams.

Minnesota is looking to rebound from a 107-98 loss to the San Antonio Spurs on Sunday in the opener of a two-game road trip. It was the second time the Timberwolves have lost to the Spurs this season.

Minnesota trailed by as many as 19 points in Sunday’s setback. Chances of a comeback were sabotaged by 4-of-29 shooting from 3-point range.

Towns scored 26 points on 10-of-19 shooting for his fourth straight 20-point effort. He is averaging 23.8 points during the span.

Anthony Edwards had 18 points and is off to a strong start. He has scored 30 or more points three times and 29 in another game.

Offseason acquisition Rudy Gobert matched his season low of nine points. However, he did collect 12 rebounds for his fifth double-digit outing and leads the NBA with 14.7 boards per game.

Minnesota’s Kyle Anderson (back) returned Sunday after a four-game absence, but he’s listed as questionable for Tuesday’s contest.