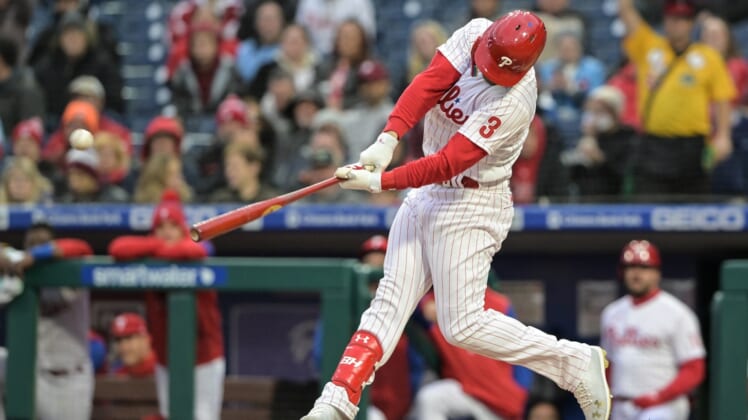 Didi Gregorius contributed two hits, a sacrifice fly and two RBI for the Phillies, who won their third in a row in this four-game series. It was the 1,000th career game at shortstop for Gregorius.

Herrera launched a homer to the second deck in right field to lead off the bottom of the first inning for a 1-0 Phillies lead. It was the fifth career leadoff homer for Herrera.

The Phillies went ahead 2-0 in the second when Herrera hit a sacrifice fly to center, scoring Johan Camargo.

In the third, the Rockies tied the game at 2 thanks to RBI singles from Connor Joe and Grichuk. Despite going 0 for 5 on Tuesday, Joe has hit safely in 13 of the last 14 games.

Castellanos produced an RBI groundout in the third to score Harper, who tripled to open the inning. Gregorius added an RBI double for a 4-2 advantage.

Stubbs hit his first Major League triple in the sixth which scored Gregorius for a 5-3 lead.

Joe grounded into a double play to end the seventh against Seranthony Dominguez.

The Phillies took a 6-3 lead in the seventh when Bohm hit an RBI infield single to third. Gregorius followed with an RBI sacrifice fly for a four-run advantage.

Brad Hand struck out Ryan McMahon with the bases loaded to end Colorado’s scoring threat in the eighth.