Cleveland Browns wide receiver Odell Beckham Jr. has officially been cleared to participate in the team’s training camp, and won’t begin the ramp up to the 2021 NFL season on the physically unable to perform list.

NFL Network’s Ian Rapoport reported the news on Beckham’s status, which is the latest hurdle the dynamic playmaker has cleared in a stunning recovery from a torn ACL.

Beckham suffered the major knee injury in Week 7 of last season on October 25, 2020. The fact that he’s running, cutting and freely moving bodes well for a Browns offense that thrived even without him down the stretch of last year. 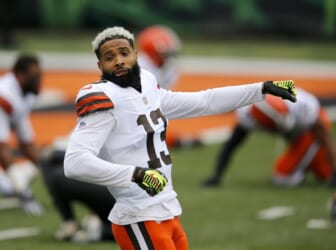 Could Odell Beckham Jr. help the Cleveland Browns to a Super Bowl?

In a recent interview, Beckham spoke about how heartbreaking it was to not be part of Cleveland’s run to the playoffs, and how he wished he could’ve been out there for the Divisional Round loss to the Kansas City Chiefs.

“I watched them compete last year and it was like the one game that hurt me the most was watching Kansas City,” Beckham said, per ESPN.com’s Jake Trotter. “Feeling like, man, I know I could’ve made one play — just something to help the team.”

The Browns lost to the Chiefs 22-17 at Arrowhead Stadium, and although the visitors benefited from Patrick Mahomes exiting due to injury, it was still a great opportunity to steal a road win and a berth in the AFC title game.

In fact, had Rashard Higgins not fumbled into the end zone near the end of the first half, Cleveland very well may have won. Presumably, if Beckham were playing, he could’ve created at least one or two big plays for himself or others that could’ve put the Browns over the top.

But that’s all in the past, and as Cleveland fans and the franchise are hoping, too, are Beckham’s injury issues and his lackluster chemistry with quarterback Baker Mayfield.

Beckham and Mayfield struggled to get on the same page in their first year playing together in 2019. That was in part due to Freddie Kitchens being the head coach and being way in over his head. Then, the COVID-19 pandemic and a transition to coach Kevin Stefanski’s system didn’t help.

The good news is, Beckham seems refreshed and obviously attacked his rehab to get back on the field quickly. Mayfield shined in Stefanski’s offense, and Cleveland should continue to benefit from having an elite offensive line and a fantastic 1-2 punch in Nick Chubb and Kareem Hunt out of the backfield.

Thanks to a revamped defense and continuity in place for the first time in Mayfield’s young career, there’s a sense that Beckham could truly be a championship-caliber difference-maker for the Browns in 2021.

Again, though, it’s about delivering on the hype, and while OBJ has fallen short in Cleveland so far — largely due to injuries — he’s well on the road to redeeming himself.