Oakland Raiders options at the top of the 2019 NFL Draft 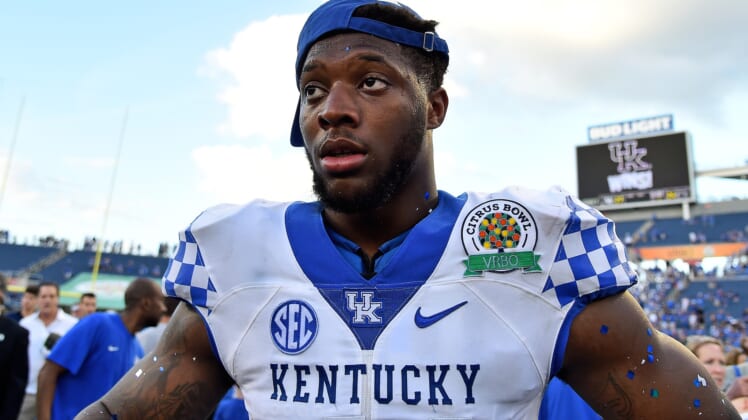 How do you feel about those comments, Raiders fans? A bit ridiculous, right? I mean, they legitimately had one of the top-three defensive players in the game before trading Mack away.

On to new things and new hope.

We’re also highly intrigued to know if Raiders fans were happy with a meaningless Week 16 win over the Broncos that resulted in the possibility of missing out on EDGE rushers Joey Bosa and Josh Allen.

The good news here? Oakland does boast three first-round picks in the 2019 NFL Draft. Given that the Raiders are in the midst of what promises to be a large-scale rebuild this is no small thing.

It’s in this that we look at the best options for these Raiders at the top of the 2019 NFL Draft. It will be separated by the three selections. Oakland’s pick is No. 4 overall. Meanwhile, the selections it acquired from the Bears (Mack) and Cowboys (Amari Cooper) will be in the 20s.

A lot of what happens at the top of the 2019 NFL Draft will depend on whether Dwayne Haskins declares. If so, multiple teams will look to trade up to the top three for the Ohio State quarterback. Depending on how Gruden actually feels about Derek Carr under center, that could be good news for the Raiders.

The self-proclaimed No. 1 pick in this year’s draft, Allen is coming off a 2018 campaign in which he earned SEC Defensive Player of the Year honors. The 260-pound EDGE rusher put up 21 tackles for loss, 17 sacks and five forced fumbles during a stellar senior season with the Wildcats.

Still a bit raw in the grand scheme of things, some might argue that Allen offers more upside than Nick Bosa at the NFL level. He also doesn’t have the injury concerns. The Raiders are playing for relevance in 2020, not next season. It’s in this that Allen would be the perfect fit.

Potentially the top overall player in the class, Williams’ domination with the Crimson Tide last season can’t be overlooked. The 289-pound freak of nature recorded 18 tackles for loss and eight sacks in 2018. He’s seen as a dominant figure along the interior of the defensive line — something a Raiders team that recorded a total of four sacks from that area last season needs desperately.

The idea would be to team Williams up with 2017 draft pick Mo Hurst to form a tremendous tandem on the inside. With two more first-round picks and a top second-round pick remaining, Oakland could then address an EDGE position that’s extremely deep later in the draft.

There's that SACK and it leads to a @UHCougarFB TD.

Has fatigue set in when it comes to Oliver? We’re not entirely too sure. The end of his tenure with Houston was filled with a certain amount of drama after he had incident on the sideline and decided to skip the Cougars’ bowl game. Even then, it has seemed for years now that he was destined to go in the top five once the defensive tackle decided to declare for the draft.

The premise here is pretty much the same as with Williams. Oakland could wait to address the EDGE pass rush need by adding a player at a position of more value earlier in the draft. It goes without saying that Oliver has the traits to be a dominant interior force, much like what we’ve seen from DeForest Buckner in San Francisco and Aaron Donald of the Los Angeles Rams. He recorded a whopping  53 tackles for loss in three collegiate seasons.

Williams’ draft stock took a hit after his performance against Alabama this past regular season. In no way does that mean he’s not worthy of a top-five pick. At 6-foot-3, he has the size to play out on the boundary opposite impressive youngster Gareon Conley. This would make for an impressive duo for Jon Gruden and Co. over the long haul.

There might be some initial struggles on double moves and the like. But that’s expected in for rookie corners in the NFL. Though, Williams brings with him a ton of talent and Pro Bowl ability. This selection would be for the future more than anything else.

It’s not yet known whether this record-breaking Buckeyes quarterback will declare for the 2019 NFL Draft. But he would be best served doing just that. Now that Oregon’s Justin Herbert has announced he’ll return for his senior season, Haskins would be the clear-cut QB1 in the draft. The same can’t be said for 2020 if he decided to return to Columbus.

There’s certainly a lot to look at here from a Raiders perspective. Assuming Haskins declares, we’re hard pressed to believe he’ll last to the No. 4 pick. We also find it hard to believe that the Raiders will in fact move on from Derek Carr. Though, Gruden’s flirtation with quarterbacks during his previous stint in Oakland and during his run in Tampa Bay makes this at least a minor possibility. What we do know is that Haskins will be a top-five pick should he declare.

Many have tried, none in the past two years have succeeded. Receivers covered by 18 forget what touchdowns are. The best CB in the country is Deandre Baker and it isn’t close. pic.twitter.com/SzxLTNiWvl

Baker got scrutinized a tad for skipping the Sugar Bowl. But you have to make the decisions that best suit your career ambitions. A likely first-round pick in 2019, that’s exactly what the 5-foot-11 corner did.

One of the primary reasons we project Baker to fall to Oakland’s second first-round pick is due to his size. The ball hawk is likely to be better suited for the slot. For a Raiders team that was exposed big time in that area this past season, adding Baker inside to go with Conley outside makes a ton of sense. He recorded 23 passes defended and seven interceptions in his final three seasons with the Bulldogs.

This one scribe is a bit more bullish on Ferrell than others. With the size to play hands down at the line and the speed to play outside linebacker, teams can utilize the studly pass rusher multiple ways. It’s something Gruden and Co. value when it comes to their defensive front.

The 260-pound defensive end recorded 18.5 tackles for loss and 11.5 sacks during the regular season. He was about as consistent as they come against top-end competition. Sure there’s a good chance he won’t last to the second half of the initial round. But if Ferrell is there, the Raiders would be hard pressed to pass up on him.

Jumping up the draft boards after a tremendous red-shirt sophomore season for the Huskies, the 5-foot-11 corner recorded 58 tackles, 13 passes defended and four interceptions. Some armchair scouts now have him over Williams as the best defensive back in the 2019 NFL Draft should Murphy — as expected — declare.

Unlike Baker, Murphy plays bigger than he his. The corner’s 5-foot-11 frame doesn’t necessarily mean he’s limited to the slot position. If so, he’d certainly be an intriguing option for the Raiders.

We didn’t focus too much on wide receiver above. There’s a good reason for this. While it’s a deep class at the pass catcher position, Oakland can nab value at the end of the first round or to open up Day 2. The likes of Harry, A.J. Brown, Marquise Brown and D.K. Metcalf could all be available.

What we like about Harry over those three is his size and ability to be a true possession receiver. The Arizona State product stands at 6-foot-4 and was simply a man among boys in college. More so than being a possession receiver, he can take it the distance on any given play (see video above). Harry would be a coup for Oakland in the second half of the first round.

With Jared Cook getting up there in age and expected to become a free agent, the Raiders must find a true catch-first tight end moving forward. Boasting blazing speed and an ability to be a matchup issue, Fant could be that guy at the end of the first round.

Fant’s career at Iowa reminds us a lot of 49ers record-breaking tight end George Kittle. He didn’t put up great numbers. But the tape showed us a story of a player that is a mismatch waiting to happen at the next level.

The idea here would be to give Derek Carr a truly dominant tight end at the end of Round 1 while addressing wide receiver a bit later.

Now that we’ve covered the options, here’s a brief look at our ideal scenario for the Raiders. Keep in mind the draft process is still in its early stage. It will be interesting to see how things progress as the process plays out.