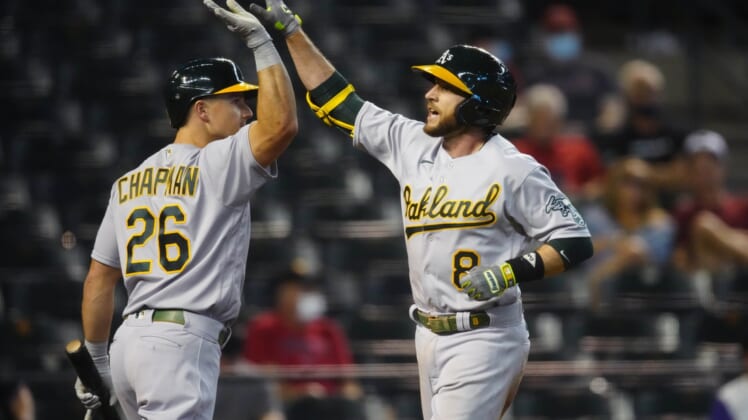 Seth Brown delivered a tie-breaking, leadoff homer in the eighth inning and the visiting Oakland Athletics rallied from a five-run deficit to beat the Arizona Diamondbacks 7-5 on Tuesday in Phoenix.

Oakland pulled even in the seventh on Jed Lowrie’s two-out, three-run homer off Kevin Ginkel before Brown capped the comeback with a 422-foot blast to right field off Anthony Swarzak (0-1).

Matt Chapman tripled in an insurance run in the ninth for Oakland, which swept the brief two-game set and has won four in a row since beginning the season with a 1-7 record.

Yusmeiro Petit (3-0) recorded one out in the seventh for the victory and Lou Trivino worked around a one-out walk in the ninth for his first save.

Carson Kelly belted a three-run homer in the second off Jesus Luzardo to begin the scoring for Arizona, which has lost five of its last seven.

The Diamondbacks knocked Luzardo out of the game in the third when Kole Calhoun and Eduardo Escobar each singled to begin the inning and Asdrubel Cabrera followed with a run-scoring double. Escobar then scored on David Peralta’s groundout to extend the lead to 5-0.

Luzardo’s ERA ballooned to 8.31 after being charged with five runs and six hits over 2 2/3 innings.

Arizona starter Zac Gallen allowed one run on three hits with eight strikeouts on 82 pitches in his season debut after previously being sidelined with a hairline fracture in his right forearm.

Escobar and Cabrera had two hits apiece for the Diamondbacks, who were 2-for-9 with runners in scoring position.

Ginkel then replaced Clarke and struck out Ramon Laureano before Lowrie tied the game with his three-run homer. Lowrie is 9-for-19 with two homers and 10 RBIs over his last five games.

Oakland used six relievers and won despite striking out 14 times.