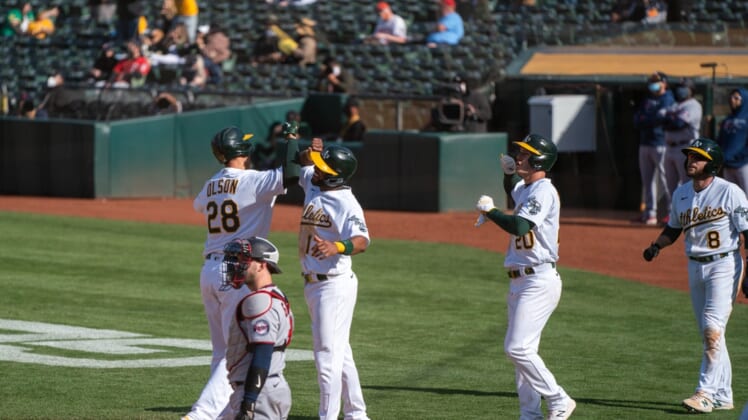 Moreland, who completed a walk-off win in his previous at-bat in Sunday’s victory over Detroit, hit his first two homers of the season. They came off Twins starter Matt Shoemaker (1-1) in each of his first two plate appearances. His two-run shot in the second inning scored Sean Murphy, while his solo blast in the fourth made it 3-0.

Oakland broke the game open later in the fourth when they loaded the bases with two outs on a single by Elvis Andrus and a pair of walks. Reliever Jorge Alcala then went to a full count on Olson before serving up the powerful first baseman’s fourth homer of the season, his fourth career grand slam.

Manaea (2-1) benefitted from the offensive explosion in his 100th career start, coasting through his seven shutout innings in the first game of the doubleheader, while allowing just six hits and one walk. He struck out seven.

His only previous complete game in his had come almost exactly three years earlier — April 21, 2018 — in a nine-inning effort during a 3-0 home win over the Boston Red Sox.

The shutout was the A’s third in their last four games. They have allowed just 21 runs during their nin-game winning streak.

The closest the Twins came to scoring was in the third, when Mitch Garver doubled with one out and took third on a single by Josh Donaldson. But Manaea got Nelson Cruz to line out to right field before striking out Byron Buxton.

The Twins also put two on with two outs in the seventh before Manaea completed his task by getting Garver to groundout.

Shoemaker didn’t make it out of the fourth, charged with five runs on four hits in 3 1/3 innings. He walked four and did not strike out anyone.

The Twins’ Willians Astudillo, with a pair of singles. was the game’s only player other than Moreland with multiple hits. Minnesota out-hit Oakland 6-5.