Oakland Athletics right-hander Chris Bassitt left Tuesday’s game against the host Chicago White Sox in the second inning after being struck in the head by a line drive.

With runners on first and second and no outs, Chicago’s Brian Goodwin lined a 1-1 pitch up the middle. The ball sharply struck Bassitt, whose momentum had taken him toward first base after delivering the pitch.

Bassitt went to the ground as the Oakland training staff tended to him, helping apply towels to Bassitt’s bloodied face. Bassitt was carted off the field as his shaken teammates looked on, many having taken a knee or held their hands in a prayerful gesture.

“Chris Bassitt is conscious and aware, and is on his way to the hospital,” the Athletics said on Twitter. “We will provide additional information when possible.

The White Sox also tweeted out their concern.

“Our thoughts are with Chris Bassitt and the @Athletics,” the White Sox said.

Oakland righty Burch Smith entered the game in relief. Smith gave up a two-run single to Andrew Vaughn and a three-run home run to Jake Lamb as Chicago took a 5-0 lead.

Bassitt, an American League All-Star this season, entered Tuesday with a 12-3 record and 3.06 ERA. 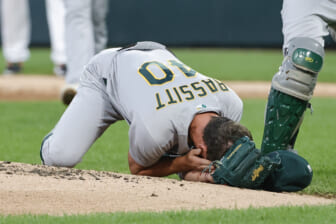