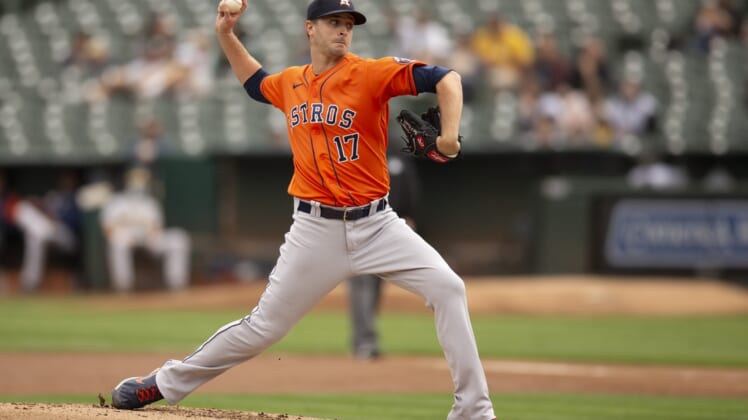 Mark Canha singled off the left-field wall with the bases loaded and one out in the bottom of the ninth inning Sunday afternoon, giving the Oakland Athletics their second consecutive walk-off win over the visiting Houston Astros, 4-3.

By completing a three-game sweep of the first-place Astros, the A’s (85-71) clung to life in the American League West. They now trail the Astros by six games with six remaining, including three head-to-heads to complete the regular season at the end of the week.

Oakland also helped itself in the AL wild-card race, matching wins earlier in the day by the Toronto Blue Jays (87-69) and Seattle Mariners (86-70). All three are chasing the New York Yankees and Boston Red Sox, who met later in the evening, for two spots.

With the loss, Houston (91-65) also saw its lead in the West shrink to five games over the Mariners.

After right fielder Seth Brown had thrown out Jose Siri at the plate on an Alex Bregman hit to end the top of the ninth, the A’s put up their game-winner after Sean Murphy led off the bottom of the inning with a single.

A bunt single, fly out and intentional walk loaded the bases for Canha, who crushed a Ryan Pressly pitch well over the head of Houston left fielder Chas McCormick to end Oakland’s home season with a 12th walk-off win.

Lou Trivino (7-7), who benefitted from Brown’s throw to the plate in the top of the inning, was credited with the win. Ryne Stanek (3-5), who started the bottom of the ninth, took the loss.

The A’s trailed 3-1 before rallying into a tie with a two-run seventh. Canha’s infield single plated the tying run with two outs after Starling Marte’s infield out had gotten Oakland within one.

A’s starter Paul Blackburn took a no-hitter two outs into the fifth inning before Jason Castro legged out an infield single to end the bid. McCormick and Siri followed with consecutive singles to get Houston on the board, tying the game at 1-1.

The A’s pulled Blackburn after five innings, during which he was charged with one run on three hits. He walked one and struck out one.

Houston took its 3-1 lead against the Oakland bullpen in the sixth when Bregman greeted Deolis Guerra with a home run, his 11th of the season, and, two batters later, Yuli Gurriel doubled home Yordan Alvarez, who had singled.

Oakland’s only run off Odorizzi came on a single by Tony Kemp with two outs in the second inning, scoring Brown, who had doubled.

Kemp had three hits and Canha two for the A’s, who move on to Seattle for another high-stakes series on Monday.

Bregman, Gurriel and Siri collected two hits each for Houston, which opens a three-game homestand on Tuesday against Tampa Bay.