Oakland A’s pile up runs in holding off Diamondbacks 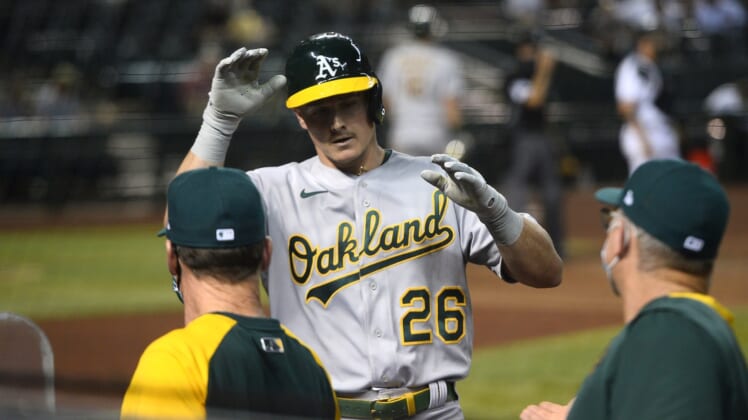 Jed Lowrie drove in three runs and Matt Chapman went 3-for-5 with a homer to help the Oakland Athletics record a 9-5 victory over the Arizona Diamondbacks on Monday night at Phoenix.

Lowrie and Ramon Laureano each scored twice and reached base three times on two hits and a walk as Oakland won its third straight game. Laureano stole two bases, Chapman had two RBIs and Sean Murphy had two of the Athletics’ 12 hits, both going for doubles.

Asdrubal Cabrera had two RBIs for the Diamondbacks, who had a two-game winning streak snapped.

Kole Calhoun reached base four times with three hits and one walk and drove in a run for Arizona, which had seven hits.

Diamondbacks left-hander Madison Bumgarner (0-2) was roughed up for six runs and seven hits in 4 2/3 innings as his ERA rose slightly from 11.0 to 11.20. He struck out five and walked three.

Left-hander Jake Diekman helped the cause by retiring all four batters he faced, and right-hander Lou Trivino allowed one single while pitching a scoreless ninth.

Oakland scored three runs in the fifth to open up a 6-2 lead.

Laureano walked with one out and Lowrie followed with a single to center. Laureano then broke toward third on a steal attempt and Bumgarner stepped off the rubber but threw wildly past Arizona third baseman Eduardo Escobar, allowing Laureano to score.

Lowrie advanced to third on the play and scored on Matt Olson’s sacrifice fly to make it 5-2. Chapman followed by swatting a first-pitch curveball deep into the stands in left.

Arizona got a run back in the sixth when Josh VanMeter led off with a triple and scored on Nick Ahmed’s one-out grounder.

The Diamondbacks moved closer in the seventh when Calhoun reached on an infield single with two outs and scored on Cabrera’s double to right center. David Peralta followed with a single to center to pull Arizona within 6-5.

The Athletics pushed their lead to two in the eighth when Stephen Piscotty hit a one-out double to left and scored on Elvis Andrus’ single to right.

Chapman added an RBI single in the ninth and scored on Murphy’s double as Oakland’s lead reached four.

The Athletics scored in the first inning on Lowrie’s infield grounder. Lowrie’s two-run double past Escobar plated two more in the third.

The Diamondbacks pulled within 3-2 in the bottom of the frame on Calhoun’s RBI single and Cabrera’s sacrifice fly.