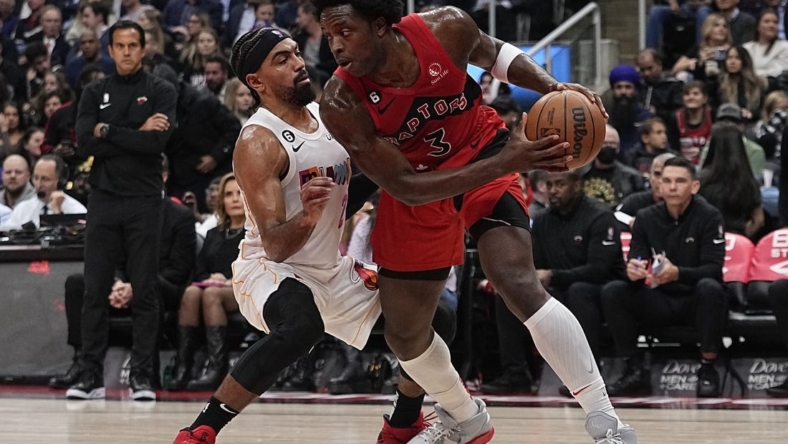 Fred VanVleet added 23 points, 13 of them in the third quarter, to help the Raptors win their second game in a row.

Scottie Barnes had 19 points, six rebounds and six assists for the Raptors, who were coming off a 1-2 road trip. Chris Boucher logged 15 points and 10 rebounds, and Thaddeus Young contributed 12 points.

Max Strus had 20 points for the Heat, whose three-game winning streak ended. Kyle Lowry added 19 points, Gabe Vincent had 16 points, Caleb Martin had 14 points and nine rebounds, and Nikola Jovic and Jimmy Butler each had 13 points.

The Raptors used a 21-0 run in a 30-19 third quarter to turn an 11-point deficit into a 10-point lead. Toronto take a five-point edge into the fourth quarter.

After Miami cut the lead to two, Toronto moved the margin to 10 on two free throws by Anunoby with 7:48 to play.

Anunoby’s layup with 5:08 left in the second quarter cut the lead to one, but Miami scored the next six points. The lead reached 10 on Martin’s two free throws with 1:21 remaining. Anunoby’s tap-in cut the deficit to 60-54 at halftime.

Butler’s running dunk put Miami up 70-59 with 8:52 left in the third quarter. Toronto responded with a 21-0 run capped by VanVleet’s 3-pointer to take an 80-70 lead with 2:04 left in the period. Miami’s Dewayne Demon completed the third-quarter scoring to cut the lead to 84-79.

The Raptors lost Dalano Banton, who had five points, to a sprained ankle in the third quarter.