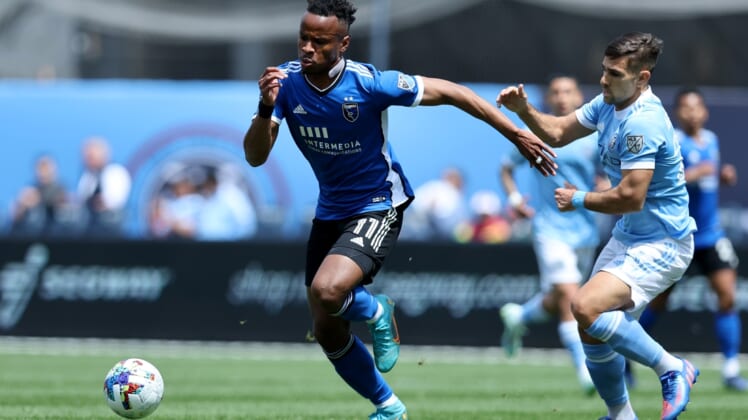 Keaton Parks and Gabriel Pereira scored four minutes apart in the second half to lift New York City FC to a 3-0 victory over the visiting San Jose Earthquakes on Sunday afternoon.

Parks and Pereira became the fourth and fifth players to score multiple goals this season for NYCFC (4-3-1, 13 points), who remained perfect three matches into a five-match homestand.

Chris Gloster added his first MLS goal to complete a late onslaught for NYCFC, who scored 14 goals in those three home wins after netting only five in their first five league matches.

The MLS Cup champions have lost only twice in their last 18 home matches despite rotating between three venues. Two of three wins in this homestand have come at Yankee Stadium, with the other last weekend played at Citi Field.

Sean Johnson made three saves to preserve his third clean sheet this season, including two in those recent Yankee Stadium games.

His goalkeeping counterpart J.T. Marcinkowski made six stops for San Jose, which matched the hosts for the opening hour before capitulating easily once they finally went behind.

The Earthquakes (1-5-3, 6 points) remain without a point from their travels in four matches.

Their erosion began in the 74th minute, when Parks played a slick give and go with Talles Magno down the left side of NYCFC’s attack.

Magno did well to shield himself from a challenge by a San Jose defender. And Parks also finished excellently on the run, curling a bending effort beyond Marcinkowski into the top right corner.

Pereira’s goal also involved a deceptively impressive finish, when he took Santiago Rodriguez’s feed at the edge of the penalty area and snapped a left footed shot into the left corner. Despite coming from a stationary position, it had plenty of power to beat the diving Marcinkowski.

Gloster then ran onto Maxi Moralez’s throughball 10 minutes later to finish off the outburst. This time, Marcinkowski erred in allowing Gloster’s shot between him and the near post.