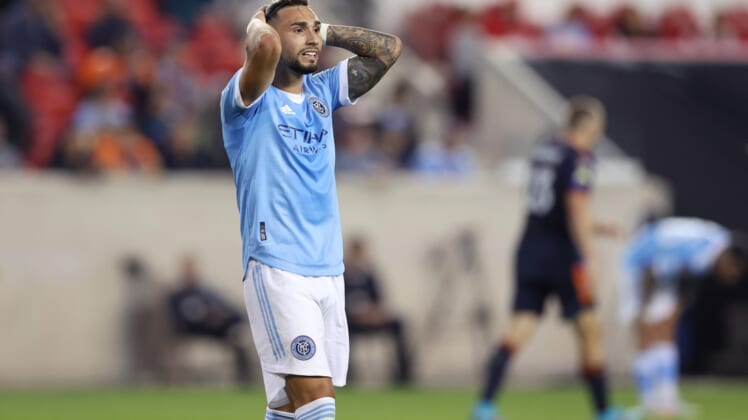 Defending MLS Cup champions NYCFC (1-3-1, 4 points) finished the second leg of their semifinal series against the Seattle Sounders tied 1-1 on Wednesday night. That result sent Seattle through to the final with a 4-2 win on total goals.

The elimination will force NYCFC to refocus on the domestic campaign, where the club has yet to recapture the form it displayed a season ago.

“We want to win football games,” NYCFC coach Ronny Deila said. “It’s been some time since we’ve done it now. We need to put out some really good performances, we need to do the dirty work every time like we did yesterday and then we know we have (the) quality to open up opponents and that’s what we need to do on Sunday.”

Defending MLS goal-scoring champion Valentin Castellanos is still looking for his first tally of 2022, and as a team NYCFC have only scored in two of their five games. On the plus side, Heber scored his first goal since 2020 when he found the back of the net late in a 2-1 loss at Toronto FC on April 2.

Midfield playmaker Maxi Moralez (ribs) and defender Maxime Chanot (eye) have both been removed from the team injury report after they missed Wednesday’s game.

Eight different players already have scored for RSL, who began their season earning 10 points out of a possible 12 before seeing their form dip slightly of late.

Last year’s leading scorer Damir Kreilach got his first goal this season in a 2-2 draw at home against Toronto last week.

In their first four away games, RSL are 1-1-2. But attacker Justin Meram knows winning in the Bronx on the compact Yankee Stadium field can be a different challenge.

“That’s a hard place to play,” Meram said. “That field is really tight and really small. You’ve got to be really sharp with the ball.”