NYCFC hold on for wild 5-4 win over Toronto FC 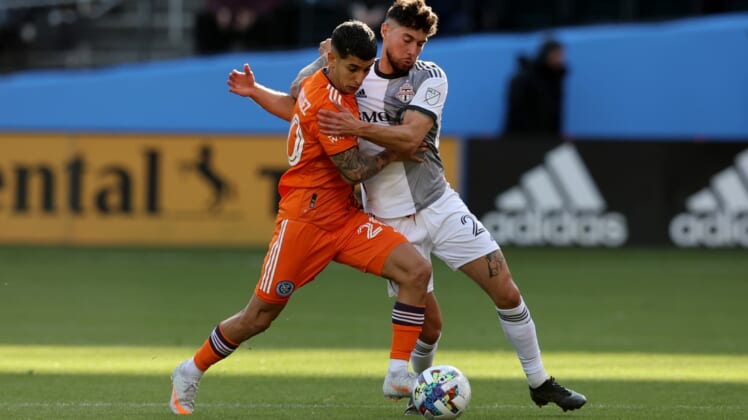 Santiago Rodriguez scored the tiebreaking goal in the 54th minute as New York City FC stormed back from a two-goal deficit and held on for a 5-4 victory over Toronto FC Sunday afternoon at Citi Field.

NYCFC (3-3-1, 10 points) won its second straight after last week’s record-setting 6-0 win over Real Salt Lake. The defending MLS champions have scored 15 of their 16 goals in their wins.

Thiago Andrade scored the tying goal in the 49th minute and added an assist.

Related: Soccer games today – Times and odds for all the best league’s in the world

Valentin Castellanos scored late in the first half after getting four goals last week. Keaton Parks scored the fourth goal in the 58th minute and Gabriel Pereira scored his first MLS goal in the 75th.

Jesus Jimenez scored twice within the first 27 minutes for Toronto (3-3-2, 11 points), which saw a four-game unbeaten streak end. Deandre Kerr scored in the 86th and Michael Bradley scored in the 90th on a header off a free kick after NYCFC’s Alfredo Morales was shown a second yellow card, forcing them to play with 10 players.

Jimenez gave Toronto a 1-0 lead following a four-pass sequence. He got a cross from Jonathan Osorio, slipped by a defender and tucked a right-footed shot from the center of the box into the middle of the net.

After VAR disallowed a goal by Castellanos in the 17th, Jimenez finished of a stellar Toronto counterattack. He got a long pass from Kosi Thompson, sped past Morales and put another right-footed shot from the center of the box into the net.

Castellanos finished the first half with seven shots and finally scored on a right-footed shot from the center of the box after getting a pass from Andrade.

Andrade tied the game when he got a pass from Talles Magno and tucked the shot into the vacated left side of the net.

Rodriguez struck moments after Alex Callens forced Bradley into a turnover. He finished the play by lifting a right-footed shot into the net from the right side after getting a cross from Castellanos.

Moments after Toronto’s Jacob Shaffelburg was unable to clear the box, Parks had plenty of time to lift a right-footed shot from the center of the box into the net to make it 4-2.