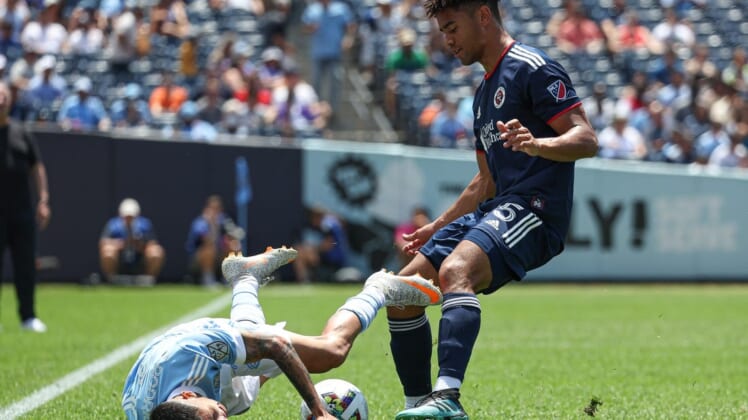 Talles Magno added the opening goal from the penalty spot and Gabriel Pereira scored shortly after his second-half introduction for NYCFC (9-4-5, 32 points), which had drawn three and lost once in Cushing’s four previous MLS games in charge.

Cushing took over in early June after Ronny Deila departed to take over Standard Liege in Belgium. His side moved into second place for the time being in the Eastern Conference after becoming the first team in MLS history to be awarded three penalty kicks in an MLS match.

Castellanos would’ve had his third career MLS hat trick and second of the season had he not seen one of those penalties saved by New England goalkeeper Djordje Petrovic.

Gustavo Bou scored his fifth and sixth goals of the season for the Revolution (6-6-7, 25 points), who had their 10-game unbeaten run snapped.

The defending Supporters’ Shield holders have now conceded multiple goals in seven of their nine away matches, and three or more in four of those games.

Petrovic made seven saves for New England, which was reduced to 10 men when Andrew Farrell was sent off for pushing down Castellanos in the penalty area, and in the view of referee Tim Ford denying an obvious goal-scoring opportunity.

Replays suggested the foul may have occurred just outside the penalty area. But Ford’s officiating crew did not opt for a video review. And after seeing Petrovic make a diving stop of his earlier penalty, this time Castellanos hammered in an emphatic finish that gave the goalkeeper little chance.

Pereira made it 3-1 in the 49th minute when he got free on the break, rounded Petrovic and shot into an open goal from close range.

New England pulled one back in the 77th minute when Bou pounded in a first-time effort from DeJuan Jones’ low cross after Carles Gil’s pass freed Jones down the left side.

But Castellanos gave the home team insurance five minutes later when he put away a rebound following Petrovic’s diving stop of Thiago Andrade’s effort on the break.