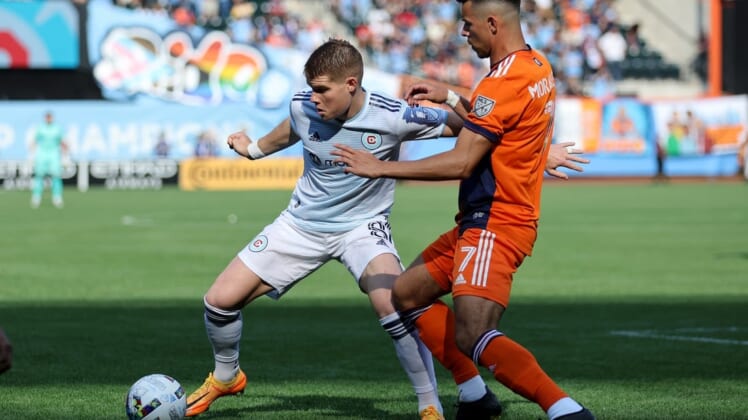 The New York City Football Club have been rather generous of late, and that’s not a good thing.

That run of generosity came after NYCFC allowed just 21 goals in their first 22 matches.

“It’s honestly not a good moment for us as a group. Losing three in a row is unacceptable,” club captain Sean Johnson said following NYCFC’s 3-1 setback to expansion Charlotte FC on Wednesday. “We understand we have to put in performances since there are nine games left in the season. We can only look forward, but we have to figure out how to get things right.”

Johnson made one save and Heber scored on a penalty kick in the 23rd minute to help NYCFC post a 1-0 win over Chicago on May 22.

While that match was in New York, Sunday’s clash will take place in Illinois.

That’s likely music to the ears of the Fire, who are 4-1-1 in their past six home matches. They have recorded a clean sheet in five of those contests to boot.

That run included a 1-0 victory over Philadelphia on June 29. The Union, however, avenged that setback with a resounding 4-1 triumph over the visiting Fire last weekend.

Xherdan Shaqiri recorded one of his team-leading 11 assists in the Fire’s last match. He has one goal and four assists over his past four games.

Sunday’s match was moved to SeatGeek Stadium due to the poor field conditions caused by the hectic schedule at Soldier Field in Chicago.

“I’d like to see greater cooperation based on the fact that this is our home and we play 17 games there,” Fire president Ishwara Glassman Chrein told the Chicago Sun-Times. “It can only be sustainable when we can have dates where players can play safely on the field 17 times a year, hopefully plus playoffs.”