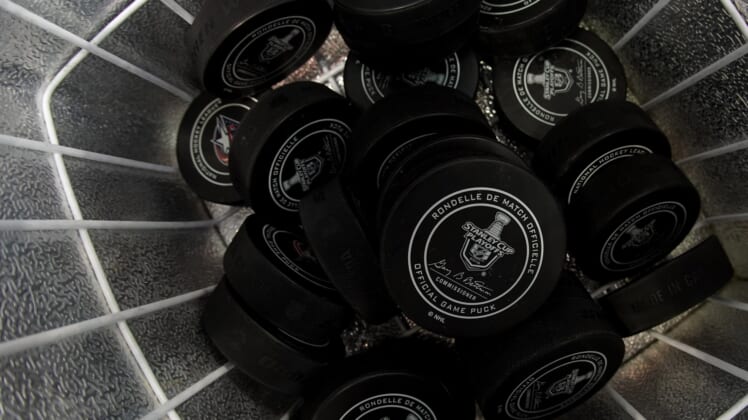 Apr 19, 2018; Columbus, OH, USA; A view of official game pucks with the Stanley Cup logo prior to the Washington Capitals against the Columbus Blue Jackets in game four of the first round of the 2018 Stanley Cup Playoffs at Nationwide Arena. Mandatory Credit: Aaron Doster-USA TODAY Sports

Quinton Byfield, the No. 2 overall pick of the 2020 NHL Draft, signed a three-year, entry-level contract with the Los Angeles Kings on Friday.

Byfield was the highest selected Black player in a draft in league history. Forward Evander Kane was the fourth overall pick of the 2011 NHL Draft by the Atlanta Thrashers, while defenseman Seth Jones was selected fourth overall in 2013 by the Nashville Predators.

“Quinton is an exceptional young man and talented player with a very bright future,” Kings general manager Rob Blake said after drafting Byfield on Oct. 6. “We’re proud to be adding him to our organization and look forward to the next stages of his development and a promising career in L.A.”

Byfield, a center, recorded 82 points (32 goals, 50 assists) in 45 games with Sudbury of the Ontario Hockey League last season. The 18-year-old led the Wolves in points, assists and a plus-26 rating.