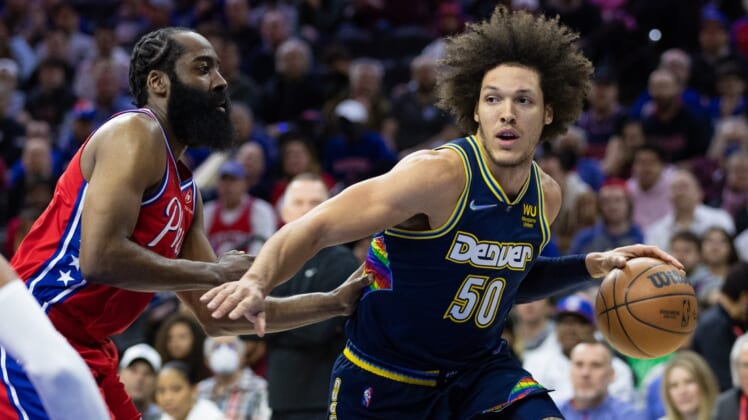 Will Barton added 20 points, Monte Morris contributed 11 and JaMychal Green had 10 for the Nuggets, who rallied from a 19-point second-quarter deficit.

Georges Niang dropped in a 3-pointer with 3:56 left in the second quarter and the Sixers led 54-35. Jokic converted a three-point play with 1:56 remaining as Denver closed within 58-46.

The Nuggets closed the first half on a surge, using a 10-0 spurt to trail 58-53 at halftime. Barton led the Nuggets with 14 points before the break. Embiid paced the Sixers in the first half with 16 points on 5-of-7 shooting.

When Jokic scored in the low post with 9:33 to go in the third quarter, the game was tied 61-all. On Denver’s next possession, Jokic fired a long pass to Jeff Green, who threw down a dunk for a two-point advantage.

The Sixers went ahead 70-66 after Embiid hit four straight free throws. Following an empty Nuggets possession, Embiid made a 15-foot jumper and the Sixers led 72-66 with 6:04 remaining in the third quarter, before leading 88-81 at the end of the period.

Denver’s DeMarcus Cousins hit a 3-pointer from the wing to tie the game at 89-all with 9:34 remaining. Hyland drained three consecutive 3-pointers for the Nuggets, who pulled ahead 103-97 with 6:08 left.

The game became chippy with Harden and Cousins each picking up a technical foul with 7:04 remaining. After six consecutive points, the Sixers tied the score 103-all with 4:42 remaining.

Embiid went crashing to the floor after a hard foul by JaMychal Green with 3:13 left. After a video review, Green was called for a flagrant-1 foul.

Hyland responded with a 3-pointer and Jokic hit a difficult shot from the corner for a 112-108 lead with 1:32 remaining.