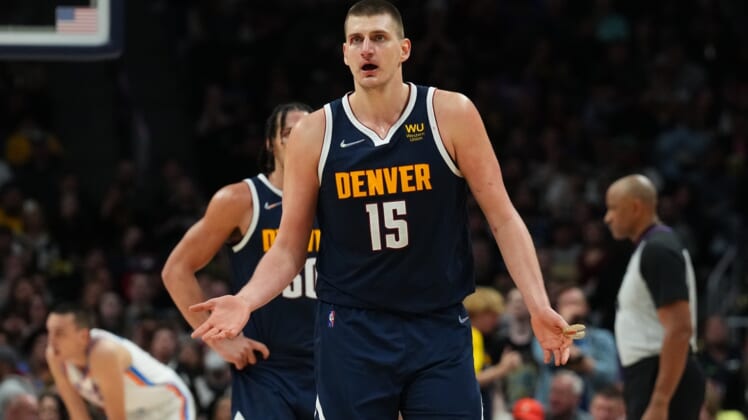 The Denver Nuggets are making a push to climb higher in the Western Conference standings over the final 12 days of the regular season while the Indiana Pacers have been going in the opposite direction in the East.

The divergent paths will intersect at Indiana on Wednesday night.

The Nuggets (45-31) are coming off an impressive 113-109 victory at Charlotte on Monday night and have a key matchup with Minnesota on Friday night, but in the middle is a game against the Pacers, who are on a four-game losing streak and have given up at least 131 points in each of the past three defeats.

Indiana (25-51) announced that center Myles Turner will miss the remainder of the regular season with a left foot stress reaction that has sidelined him since Jan. 14. The Pacers had only eight players available in a home loss to Atlanta on Monday night.

“Yeah, we’re down bodies, but this is basketball and it’s an opportunity for somebody to step up and make plays and get more minutes,” said Buddy Hield, one of the players acquired from Sacramento in a trade-deadline deal that sent Domantas Sabonis to the Kings. “Who doesn’t like playing more minutes?”

Duane Washington Jr. didn’t play against the Hawks due to a right hip bruise but was listed as day to day. Malcolm Brogdon also sat for rest and could be available against Denver.

Wednesday will be the second and final meeting between the teams. The Nuggets won the first matchup 101-98 at Denver on Nov. 10 while playing without Nikola Jokic, who was serving a one-game suspension for a shove of Miami’s Markieff Morris in the Nuggets’ previous game.

Jokic is expected to be on the court this time, trying to lead Denver to its 24th road win of the season. Monday’s victory set a franchise record for road victories and kept the Nuggets in range of the Utah Jazz for first place in the Northwest Division.

“It just seems like we have been good on the road,” said Jokic, who recorded his 19th triple-double with 26 points, 19 rebounds and 11 assists Monday night.

A winning streak to end the regular season could vault Denver past the Jazz in the standings, while a couple of stumbles might put the Nuggets in the play-in bracket.

“We know what’s at stake,” guard Monte Morris said after the win over the Hornets.

Denver has won two straight games and played Monday without reserve JaMychal Green due to a wrist injury. The Nuggets are accustomed to playing shorthanded. Jamal Murray (ACL) has been out all season and Michael Porter Jr. (back surgery) hasn’t played since early November.

That eliminates the top scorers behind Jokic, but others have stepped up. Morris had 14 points and nine assists Monday night and hit key free throws in the final minute. He also made crucial plays on defense in a win over Oklahoma City on Saturday night.