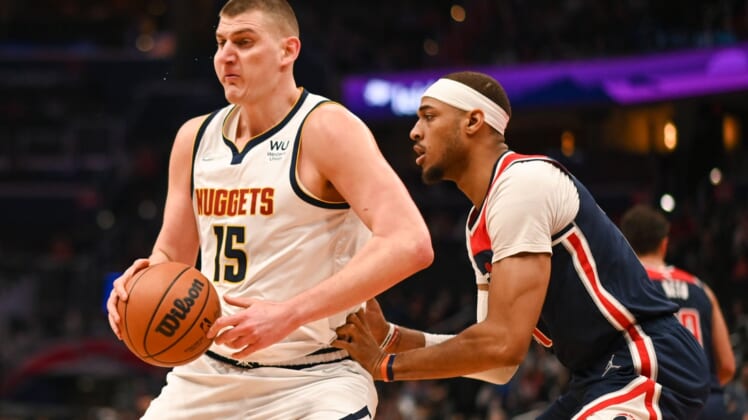 Nikola Jokic had 29 points to eclipse 10,000 for his career and added 13 rebounds and eight assists, Bones Hyland scored 17, and the visiting Denver Nuggets beat the Washington Wizards 127-109 on Wednesday night.

The Nuggets have won seven in a row on the road to set a franchise record. Their last loss away from home was Feb. 11 at Boston.

They tied the franchise record for most road wins in a season with 22.

Denver went ahead early in the game and never lost the lead. The Wizards were within 16-13 midway through the first quarter before the Nuggets stretched it to eight on a 3-pointer by Morris and a three-point play by Rivers made it 32-21.

Washington cut the deficit to 34-28 after the first quarter, but Denver pulled away in the second.

Forbes opened the quarter by being fouled on a successful 3-pointer and hit the free throw to convert the four-point play. Cousins made two shots and Rivers and Hyland had layups to cap a 13-0 run to start the second.

The Wizards scored five straight points but the Nuggets went on an 8-2 run to lead by 21 and took a 73-52 advantage into halftime.

The teams traded baskets at the start of the third quarter, with Denver taking a 23-point lead on a floating jumper by Morris. After Porzingis made a driving layup Morris drained another 3-pointer and Jokic a layup and free throw to make it 94-67 with 4:08 left in the third.

Hyland made a 30-foot 3-pointer late in the period to give the Nuggets a 104-76 lead, their largest of the night.

Washington was able to cut the deficit to 112-92 with 7:03 left in the game but never seriously threatened the lead.