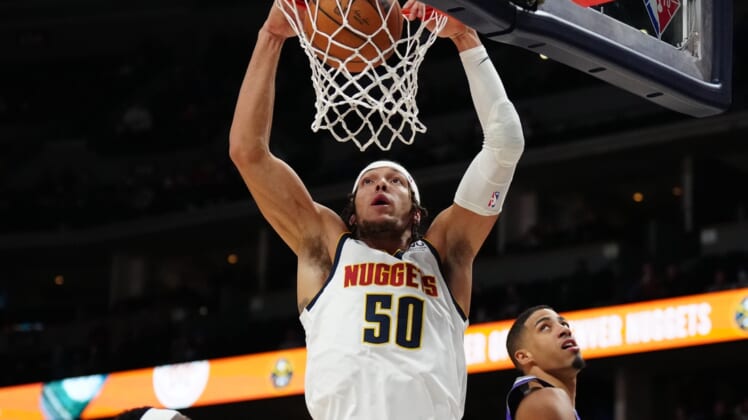 Nikola Jokic had 33 points and 10 rebounds, Jeff Green scored 18 points after missing three games while on the COVID-19 list and the host Denver Nuggets beat the Sacramento Kings 121-111 on Friday night.

Bones Hyland, Monte Morris and JaMychal Green scored 13 apiece and Aaron Gordon and Will Barton each had 10 points for the Nuggets.

Denver is 2-2 with head coach Michael Malone in health and safety protocols and assistant Popeye Jones filling in.

The Nuggets led by three midway through the first quarter and then went on a 16-4 run to take a 32-17 lead on a three-point play by Jeff Green. It was still a 15-point advantage late in the first when the Kings made a run.

Haliburton ended the period with a 3-pointer, Buddy Hield and Maurice Harkless opened the second with corner 3-pointers and Hield made a technical free throw to cap a 10-0 stretch and pull Sacramento to within 35-30.

Jeff Green hit two layups, Austin Rivers made a driving layup, Hyland hit a pair of 3-pointers and JaMychal Green drained a 26-footer in a 15-2 Denver run that made it 50-32 with 7:33 left in the second quarter.

Jokic made a layup and fed JaMychal Green for a dunk that helped the Nuggets go up by 20, but the Kings ended the second on an 11-3 run to get within 66-54 at halftime.

Sacramento kept surging and got within 70-66 on Haliburton’s 3-pointer and had a chance to cut it to one, but Fox missed from deep. Denver went on a 17-6 run, with Jokic scoring nine of those, to make it 87-72.

Jeff Green had two dunks and a layup off passes from Facu Campazzo to make it 96-85 to end the third period.

The Nuggets opened the fourth on a 12-2 run to push the advantage to 108-87 before they closed it out.