Nuggets come to town hoping to pick on tired Wizards 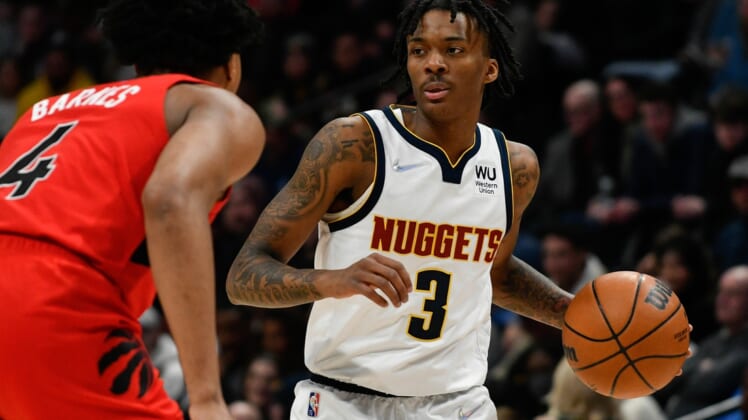 Even though the Denver Nuggets are on the road, they will have an advantage over the home team for at least one night.

Denver started its three-game trip with a win in Philadelphia on Monday and made the short trip to Washington to face the Wizards on Wednesday night.

Meanwhile, Washington is coming off a rough trip out West, where it played four games in six nights.

The Wizards lost all four, including a late game Monday at Golden State, and then made the trip home. Washington likely will be the more tired team when it takes the court against the Nuggets.

Washington allowed an average of 122.5 points in its four Western swing losses. In the last three games, the Wizards were torched by an opposing player — LeBron James scored 50 in the Los Angeles Lakers’ win, Josh Hart led Portland with 44, and Golden State’s Steph Curry had 47 on his birthday.

If the trend continues, Nuggets star Nikola Jokic is in for an MVP-type performance Wednesday night.

“We have to do a better job of shutting that valve off early and not letting (Jokic) get going,” Washington coach Wes Unseld Jr. said after the loss to the Warriors. “That’s easier said than done.”

The Wizards will have Kristaps Porzingis ready to go against Denver. He sat out the loss to the Trail Blazers, with it being the second game of a back-to-back, but returned Monday and played 27 minutes. He is averaging 20.8 points in four games since being acquired from Dallas.

Wednesday will mark the second contest of a three-game trip for the Nuggets; the trip will end in Cleveland on Friday night. Denver bounced back from a disappointing home loss to Toronto on Saturday night to beat the 76ers in a matchup of two MVP candidates. Philadelphia’s Joel Embiid outscored Jokic 34-22, but the reigning MVP had more help, especially from Bones Hyland.

Hyland, who has played inconsistently during his rookie year, hit four 3-pointers in the fourth quarter to finish with 21 points while showing the talent that made him Denver’s first-round pick in the 2021 draft.

He has supplanted Facu Campazzo in the backcourt rotation and has proved he isn’t flustered by big moments. Three of his 3-pointers in the fourth quarter put the Nuggets in the lead, the last coming with 1:51 remaining to hand Denver the lead for good.

“Fearless,” Nuggets coach Michael Malone said. “That’s one word that I would use to describe Bones Hyland.”

Hyland helped pick up the slack for Aaron Gordon, who didn’t play in late in the game because of a non-COVID illness. Gordon missed Saturday night’s game, too, but the Nuggets will need him against Porzingis.

If Gordon can shake off the bug, and with Will Barton recovered from his ankle injury to play in the last two games, Denver will be healthy despite not having Jamal Murray and Michael Porter Jr. available.