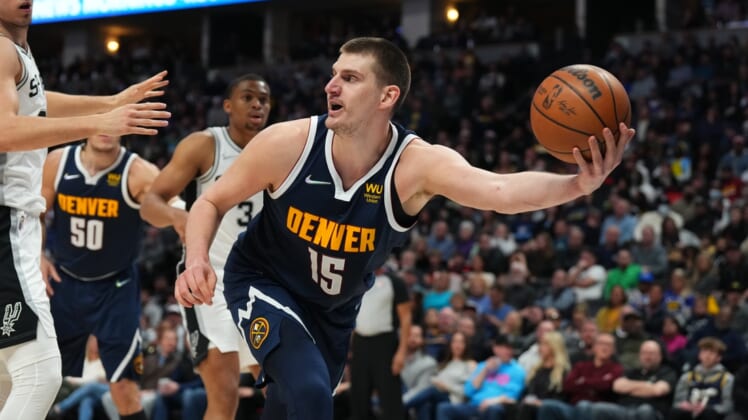 The Memphis Grizzlies know their postseason seed, they just have to wait and see who they will play.

The Denver Nuggets’ fate is still pending after another home disappointment.

Memphis (55-24) is locked into the No. 2 seed in the Western Conference and won’t know who it will face in the first round until the play-in tournament gets started. The fact that it possibly could be the Nuggets is a little surprising.

Denver (47-33) had a chance to clinch at least the No. 6 seed with a home win over San Antonio on Tuesday night but was blown out by the Spurs. The Nuggets need a win in one of their last two games to avoid the play-in tournament, and they can end the drama when they host the Grizzlies on Thursday night.

Minnesota losing at home earlier in the night Tuesday gave Denver a chance to clinch a dedicated playoff spot as a top-six team in the conference, but it fell behind by 21 in the first half against San Antonio and never recovered in a 116-97 defeat.

“It’s a bad loss for us,” said Aaron Gordon, one of just two Denver players to score in double figures with 18 points. “We just didn’t take advantage of the opportunity that was presented to us and it’s frustrating, but we know we have two games left. Our focus is on that just now.”

The Nuggets have pushed forward this season without their second- and third-best players. Jamal Murray hasn’t played after ACL surgery, and Michael Porter Jr. has missed most of the season after back surgery. It doesn’t appear as if either will return for the last two games of the season.

Memphis has played without its best player, Ja Morant, since mid-March but keeps rolling. The Grizzlies had won 11 of 12 games before losing in overtime at Utah 121-115 on Tuesday night. Their final three games are meaningless in the standings, but they do have a chance to surpass the franchise record of 56 wins set in the 2012-13 season.

Memphis nearly won Tuesday despite not having Morant or Dillon Brooks (right hip soreness) against a Jazz team needing a win to clinch a playoff berth. Jaren Jackson Jr. had 28 points and three blocks to set the franchise single-season record with 172.

Jackson leads the NBA in blocks.

Morant leads the team in scoring (27.6 per game) and assists (6.7) but the Grizzlies have shown off their roster depth, as the Nuggets know. Memphis has won the first three meetings between the teams and can copy San Antonio’s game plan from Tuesday.

The Spurs didn’t double-team Nikola Jokic, and although he had 41 points and 17 rebounds everyone else was held in check. The Grizzlies were solid defensively against a good offensive team in Utah and can build on that Thursday night.

“Resilience was good,” Jackson said after the overtime loss. “Pushed it to overtime. We were good defensively. Offensively (it was) hit-or-miss, but that’s a good team.”

It is doubtful Morant or Brooks will play against Denver — a possible second-round opponent — and Grizzlies coach Taylor Jenkins can opt to rest other players. The Nuggets don’t have that luxury and could be without Jeff Green for a third straight game.

Green left Friday’s loss to the Timberwolves for personal reasons and has not returned.